How Do I Settle a Car Accident Claim Without a Lawyer? 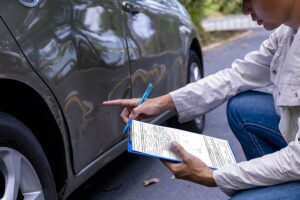 Essentially, representing yourself entails evaluating your damages and negotiating with the insurance company for a fair settlement. Damages would include medical expenses (current and future), loss of wages, loss of earning capacity (if the injuries limit you from doing your former work), future wage loss (if you’re completely incapacitated), pain and suffering, nursing care, and other related costs.

In most cases, you would require a professional to help you estimate the damages accurately—especially an experienced one who has dealt with accident claims before.

Again, as much as you shouldn’t undervalue your claim, you should be careful not to overvalue it, as this can signal your ignorance of car accident compensation laws. Ideally, damages like pain and suffering have a capped limit. The insurance company can ride on your ignorance to reduce the settlement as much as possible.

Owing to these and other complexities, hiring a lawyer experienced in car accident claims settlement becomes essential. Besides, you can usually bank on their negotiation skills to get you better compensation than you would on your own.

Challenges of Settling a Car Accident Claim Without a Lawyer

The challenges are insurmountable.

A valid must satisfy the four elements of negligence—duty of care, breach of duty, causation, and damages. Rarely do people admit fault for accidents. As they trade blame, it becomes increasingly difficult to pin the accident on someone.

Without knowledge on how to get the at-fault parties to account for their negligence, you may end up losing a good case. Essentially, you require solid evidence to back up your claim. If for some reason, you lose evidence or are not in a position to gather it on a timely basis, it can affect the claim immensely.

A lawyer experienced in car accident claims may be better placed than you to compile the evidence to prove the at-fault party breached their duty, causing the accident that led to your injuries and damages.

For instance, CCTV footage comes in handy in proving the breach of duty as it gives a real-time recording of the accident. If you contact a lawyer immediately after the accident, they can move in to ensure evidence preservation, e.g., by requesting the footage before it’s possibly deleted. It’s also possible to find eyewitnesses immediately after the accident, and the lawyer can record their statements for later use during settlement negotiations.

In addition to gathering police reports, a lawyer will also guide you in documenting and preserving medical reports to prove your damages. In a nutshell, working with a lawyer ensures you don’t neglect to gather and preserve evidence, without which the claim would be deemed invalid.

When you file a car accident claim against an insurance company, they want to settle it as fast as possible. This may be due to several reasons, though they all have a similar motivating factor–minimizing losses.

Settling the claims fast allows the insurance company an opportunity to pay less by avoiding possible future complications. Essentially, once the insurer settles the claim, the case closes. Even if your injuries worsen later, necessitating additional medical care, you cannot bring another claim.

Another possible reason for quick settlement is to avoid the possibility of trial. Trials are unpredictable, and insurance companies can incur more losses if you opt to sue them in court. For this reason, they’re always willing to negotiate and settle the claim as soon as possible. In fact, statistics show that 95 percent of personal injury lawsuits settle before trial.

Nonetheless, being for-profit ventures, insurers’ goal is always to settle for as little as possible to minimize their losses. That’s why you need an car accident attorney experienced in negotiating car accident claims to protect your rights and fight for a fair settlement.

Determining the actual value of your damages requires some level of experience. Calculating the medical costs and property damage (vehicle repair or replacement expenses) may be a matter of adding up invoice figures, but when it gets to approximating future medical costs and lost wages, expert input is essential.

Computing pain and suffering damages may also prove a challenge, especially since you do not want to over-demand beyond the capped limit. There’s also a risk of under-claiming, which can result in losses. Remember, you cannot file additional claims once the settlement is made.

The best way to handle this challenge is to hire a lawyer experienced in settling car accident claims. They can help you estimate the damages accurately and negotiate a fair settlement.

After the accident, the at-fault party insurer is likely to seontact you and make an offer. In most cases, the offer will be way too low than the actual value of the claim. Since their priority is to profit by minimizing payouts as much as possible, they might pressure you to take the offer.

The downside of this is that you may be financially strained; hence the offer might be too tempting. While the finances might help at this time, they may not be sufficient to cater to future damages.

Well, an attorney knows how to counter the offer by sending a detailed demand highlighting your damages. In most cases, the lawyer might ask for an amount higher than what would make a fair compensation while factoring in the capped limit. The essence of doing this is to give room for negotiation so that even after the bargain, the payment will still be reasonable.

#5. Filing the Lawsuit in Court

If the negotiations aren’t successful (which is rare but still possible), the lawyer can help you file a lawsuit against the insurance company/companies. Car accident claims have a statute of limitations–a deadline within which a case can be filed. Once this deadline lapses and you haven’t lodged a claim, you cannot do so afterward. Usually, the court would nullify it.

During the negotiation process, the lawyer is mindful of this deadline. If the claim fails to settle, they can swiftly move to court before the deadline closes you off. You might not have this advantage when representing yourself, especially if you’re unaware of the laws governing car accident claims.

Things to Do After an Accident

Following an accident, there are two crucial things you need to do–assessing the harm (if you can) and preserving evidence. Here are ways you can achieve these.

#1. Check on Everyone Involved

After the accident, you want to ensure that everyone is safe. First, you should evaluate your injuries and also check on the rest. Unless it’s a minor fender bender with no injuries, it’s always advisable to call for emergency care.

A health report shows that traffic injuries are the ninth leading cause of death globally. Acting promptly by getting the injured help can go a long way in saving lives. According to the study, the first hour is a golden hour. Most accident victims in need of trauma care can survive if they receive definitive care within this duration.

#2.  Keep Yourself and Others Safe

It’s advisable to leave the cars unmoved to preserve evidence; however, ensure you signal oncoming traffic to alert them about the accident scene. If you’re not hurt and can move out of your car, be careful to check other traffic so that you don’t endanger yourself.

Even if no one was hurt, and you’re not the one at fault, stay on the scene. In your absence, other drivers might blame the accident on you and see you face a hit-and-run charge, which is a serious crime.

Sometimes accident injuries do not manifest immediately, especially the internal ones. As a result, you may think you’re okay only to develop serious complications later.

Calling the police helps create vital reports that you can rely on when pursuing compensation. Once the police arrive, get their details (name, contact information, badge number) and request a copy of the accident report.

You should file as much evidence as possible while waiting for the police to arrive. For example, you should take photos of the cars and the accident surroundings. Also, you need to take shots of your injuries and get the contact details of witnesses.

#6. Get Information From Other Parties

Ensure you collect information from those in the crash–their name, phone number, address, driver’s license number, insurance policy number, etc. While at it, you should ascertain that the details provided do not conflict.

Calling a lawyer immediately after the accident helps protect your rights. The lawyer can guide you on what you need to do to preserve the evidence and things to avoid so as not compromising the claim.

Failing to report the accident is a contract breach. In this case, you would be responsible for the cost of defending yourself, should the other driver shift the blame on you.

#9. Visit a Doctor and Document Your Treatment

Even after the emergency team has examined and discharged you, ensure you visit your doctor if you experience any pain or complications. Usually, some injuries take longer to manifest. For instance, brain trauma might lay dormant at first only to get pronounced several hours later.

Finally, you should journal your healing process and keep track of your treatment. These records come in handy when computing damages.

A Recap of Don’ts After a Car Accident

Even if you’re not at fault, there are things you can do and ruin your claim. Others can even land you in unnecessary trouble if the other driver gives a false report.

Here is a summary of the don’ts you should keep in mind.