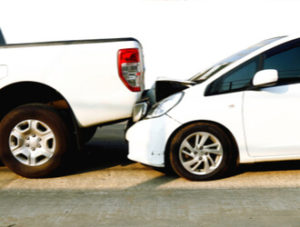 Motor vehicle collisions may occur in a number of different ways. Vehicles can collide in several different locations on a car and at several different angles. The severity of the injuries that result from an auto accident often depends on the type of crash that occurs. However, even the most seemingly benign types of collisions can cause serious injury.

As reported[1] by the National Transportation Safety Board (NTSB), 28 percent of collisions are rear-end accidents. A rear-end accident occurs when the front end of one vehicle crashes into the rear of another vehicle. This type of an accident most often happens in heavier traffic, but that is not always the case. While rear-end accidents are considered to be a less serious type of collision, statistics published[2] by the National Highway Traffic Safety Administration (NHTSA) show that almost 2,000 people in the United States died in rear-end collisions in 2012.

If you have suffered injury and related losses in a rear-end accident, there may be more complex legal issues involved that you may imagine. You should always contact an experienced Philadelphia rear-end accident attorney at the Levin Firm for assistance as soon as possible following an accident.b>

The injury most commonly associated with a rear-end accident is whiplash. Whiplash[3] is not actually a singular condition, but a term used to describe several types of soft tissue damage in the neck. Such damage is caused when the head suddenly jerks forward and then snaps back (or vice versa), similar to a cracking whip. It is common for a motorist’s head to move in this fashion in the rear-end collision.

Though many whiplash cases are relatively minor, some may be quite severe and cause long-lasting symptoms. Symptoms of whiplash may include:

Many victims of whiplash require extensive physical therapy and other medical treatments to fully recover, and they may not be able to perform certain job functions due to their injuries.

In addition to whiplash, victims of rear-end accidents commonly suffer concussions and other traumatic brain injuries, spinal injuries, facial fractures, contusions or lacerations, broken bones, and more. All of these injuries can cause a victim to incur significant medical bills, lose income, and more.

Fault in a rear-end accident is generally attributed to the vehicle in the back that actually struck the rear of the front vehicle. Sometimes, the driver in front does suddenly brake or slow down prior to a rear-end collision, and you may wonder why that driver is not considered to be at fault. This is because a driver is expected to pay attention and follow at a safe enough distance that he or she will have plenty of time to stop if the car in front of them suddenly hits the brakes. If a rear-end collision occurs, it is often assumed that one of the following is true of the rear driver:

Though the rear driver is generally presumed to be responsible, there are other parties who may act negligently and cause a rear-end accident. For example, if the front driver did not have properly functioning brake lights, the rear driver would have no indication that they needed to slow down or stop. Additionally, if faulty brakes, tires, or other auto parts caused the collision, the auto parts manufacturer can be held responsible due to the negligent sale of defective products.

Finally, sometimes more than one party is at fault in a rear-end accident. Even if you were partially at fault, however, you may still be able to partially recover for your losses under Pennsylvania’s comparative negligence law.[4] For this reason, it is always a good idea to consult with an auto accident attorney even if you believe you partially contributed to the accident.

If you have suffered injury in a rear-end collision, an experienced Philadelphia rear-end accident lawyer can advise you of your legal rights and options to recover for any of your injury-related losses. Even if you were in the rear vehicle, an attorney will evaluate the circumstances of your accident to determine whether at least partial recovery may be possible. At the Levin Firm, we are committed to helping injured victims receive the compensation they deserve, so call today at 877-825-8542 for a free consultation.

Latest News
View All Articles
July 11, 2020
How Will My Family Be Taken Care of After a Truck Accident

Fully loaded semi-trucks can weigh up to 80,000 pounds, and even when they are empty, they weigh well over 30,000 pounds. The force a heavy truck imparts in a c...

July 10, 2020
How to Preserve Evidence for a Truck Accident Claim

Truck accidents often lead to severe, sometimes fatal injuries that devastate victims and their families. Over the last three decades, 4,000 to 5,000 people hav...

We rely on truck drivers and trucking companies to transport the goods we need and want throughout the entire United States. Yet, large semi-trucks on the road ...