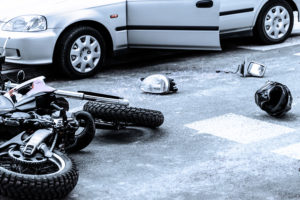 Pennsylvania is home to some of the most scenic motorcycle routes in the country. Motorcyclists can follow the Lake Erie coastline, travel one of the federal or state-designated Scenic Byways, roll through the hills and valleys of the Pocono Mountains, visit one of the charming country towns in Amish country, or travel to the cradle of American independence in Philadelphia.

But no matter how enjoyable, traveling by motorcycle also comes with serious risks. Motorcycle riders have virtually no protection from the impact of a collision. According to the National Highway Traffic Safety Administration, 4,985 motorcyclists died in crashes in 2018 on U.S. roads.

Although this number represents a welcome decrease of almost 5 percent from the previous year, motorcycle riders still account for 14 percent of all traffic-related fatalities. Based on 2018 statistics, in Pennsylvania, there were 164 motorcycle fatalities. Of these, 153 (93.3 percent) were riders, and 11 (6.7 percent) were passengers.

Before you hit the open road, get to know the answers to the following important questions about motorcycle accidents.

Many people love to ride a motorcycle because it is a full-sensory experience. That means, however, that riding requires different types of focus and concentration than those involved in driving a car. Motorcycles are two-wheeled vehicles, so they risk toppling over when they stop moving. Someone new to motorcycles must develop a new set of skills, including steering, braking and changing gears. Motorcyclists must also have heightened awareness of their surrounding environment. They feel free and at one with the road, but they are also more physically vulnerable.

Stay focused and aware at all times.

What are Pennsylvania’s motorcycle license requirements?

What do you need to know about Pennsylvania motorcycle law?

Pennsylvania law sets forth rules which limit the seating on and methods of riding a motorcycle. The motorcycle must have permanently-attached seats. If there is a passenger, the rider can only ride on the motorcycle if it has permanent regular seating for two people.

A rider must face forward with his or her legs on each side of the motorcycle unless riding in a sidecar. Passengers are not permitted to sit in front of the operator while the motorcycle is in motion.

In general, it is against the law to operate a motorcycle in any way that presents a risk to the safety of the operator or passenger. For example, the operator may not ride carrying an item that prevents him or her from using both hands to operate the motorcycle.

There are also laws governing the operation of motorcycles on roads divided into two or more lanes. On those roads the following rules apply:

The operator or passenger of a three-wheeled motorcycle equipped with an enclosed cab is not required to wear a helmet. Motorcycle helmets must comply with the standards provided by the United States Department of Transportation. This is indicated by the “DOT” sticker on the helmet. It must also be labeled with the manufacturer’s name, model number, size, and month/year of the helmet’s manufacturing date.

In addition, all motorcycle riders and operators must wear safety glasses, goggles, or similar protective eyewear while riding on a motorcycle.

There are many potential causes of motorcycle accidents. Some of the most common include:

What if another driver is negligent?

Anyone operating a motor vehicle should always be attentive behind the wheel and give motorcyclists plenty of space to ride safely. However, when riding a motorcycle, sometimes it is not possible to evade negligent drivers. Negligence is defined as “a failure to behave with the level of care that someone of ordinary prudence would have exercised under the same circumstances.”

If a negligent (or intentionally reckless) driver causes an accident, motorcyclists can recover damages if they can prove:

Some motorcycle accidents result from a defect in the design or manufacture of the motorcycle, or its components, in which case the company that designed or built the motorcycle or its parts may have legal liability for damages.

Motorcycles are much more sensitive to road conditions. Therefore, poorly maintained roads may contribute to an accident.

What are common motorcycle accident injuries?

What compensation can a motorcycle accident victim recover?

If you have been injured in a motorcycle accident, you may have the right to recover financial compensation for the harm the accident caused, including:

The nearly 850,000 licensed motorcyclists in Pennsylvania cannot control how other motorists drive, and thus cannot avoid all accidents. They can, however, improve their safety on the road by following some simple safety tips:

Latest News
View All Articles
April 3, 2020
How Much Money Can I Expect as a Passenger in a Car Accident?

Can A Passenger In a Car Accident Receive Compensation? As the passenger in a vehicle, you have no control over what happens around you. You cannot act to preve...

More than 78,000 people sustain injuries in traffic-related accidents in the Commonwealth each year—equaling around 214 injuries per day on Pennsylvania roadw...

If you learn and practice fire safety, you can protect yourself and your loved ones from falling victim to a dangerous and deadly fire. Below the skilled burn i...