Should I Get a Lawyer for a Motorcycle Accident? 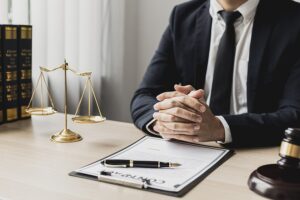 If you were injured in a motorcycle accident, you should get a lawyer to protect your rights and negotiate fair compensation. Even though you can still file a claim against the at-fault party’s insurance company on your own, going it alone minimizes your chances of receiving total compensation due to the complexities involved.

Whether you have sustained a brain injury, burns, chest trauma, spinal injury, broken bones, or any other type of injury, we understand the resulting medical costs can be hefty. Loss of wages during your recovery is also apparent.

That’s why you should aim at maximizing any settlement to cover the full spectrum of damages. While hiring a lawyer does not always guarantee compensation, it raises your possibility of getting a higher payment than you would if you pursued the case independently.

Generally, any personal injury attorney can represent you, but getting a motorcycle accident lawyer who has proven experience in motorcycle accident claims would be immensely beneficial. There’s a stereotype about motorcyclists, with some people perceiving them as reckless. Hence, you want to work with a lawyer who respects and empathizes with you. Choosing one who has a track record of representing motorcyclists successfully can be a rewarding decision.

Motorcyclists are vulnerable road users, with their rights being regularly overlooked by some drivers. Numerous motorcycle accidents happen every year, resulting in tens of thousands of injuries. These crashes cost billions of dollars annually in expenses related to medical bills, property damage, therapy, lost wages, etc.

In most cases, bikers are not at fault for these accidents. Reports indicate that most motorcycle crashes involving other vehicles are caused by a failure or error of the other driver.

The Hurdle of Proving Negligence

Generally, motorcycle accident claims rely on the legal theory of negligence. To post a valid claim, you must demonstrate that the at-fault party or parties’ negligence caused the accident.

This involves meeting the following four elements of negligence:

The at-fault party ought to have owed you a duty of care for the claim to be valid. Generally, motorists owe other road users a duty of care. Hence they must prioritize their safety whenever they get behind the wheel.

If the driver acted negligently, e.g., by getting distracted while driving or over speeding, thereby hitting you, then that amounts to a breach of duty. To satisfy this element, you must table evidence to prove their breach.

Breaching duty is not enough to get the at-fault party’s insurer to compensate you. Their actions must have directly caused your injuries. For instance, a person seeking compensation for chest trauma must prove the injury resulted from the accident. Otherwise, the insurance company may claim the trauma did not come from the accident in a bid to invalidate the claim.

The other element of negligence the claim ought to satisfy is damages. Essentially, the accident must have resulted in substantial losses, such as medical costs, property damage (motorcycle repairs), therapy expenses, etc. Otherwise, if the losses are inconsequential, then the claim might be deemed invalid.

Despite proving the at-fault party’s negligence, the comparative negligence principle might spring into effect, sometimes invalidating the claim. The principle involves splitting the blame and reducing the damages by the plaintiff’s percentage of fault.

Comparative negligence principle varies from state to state as follows.

What Can a Lawyer Do for You?

In any case, the insurance company will likely push you to admit fault for the accident so that they can deny the claim. That’s why you should not speak to any insurance representatives before consulting an attorney.

Under no circumstances should you acknowledge fault, or allow the insurance company to make recordings of your statement without your lawyer present. A slight mistake on your part can invalidate the claim, regardless of who the at-fault party actually was.

Owing to these apparent pitfalls, getting a lawyer to represent you is of utmost importance. Among other things, the attorney will:

Between doctor appointments, therapy sessions, and mandatory bed rest, managing legal proceedings might be too much for you to handle. Personal injury claims also come with a statute of limitations, some of which can be too short.

Hiring a lawyer not only takes away the stress but can quicken the process and avoid losing a chance for compensation due to late claim submission. In most cases, the lawyer will assume the entire process, and you will be hardly involved in the process. This allows you time to recover and concentrate on getting your life back together.

Generally, the lawyer is conversant with the state or national laws relevant to your case, which might not be the case with you. As such, they know how to represent you best and navigate any legal hurdles that may crop up in the course of negotiations or during the trial if the claim fails to settle.

#2. Investigate the Case and Build Evidence

Having a motorcycle accident does not automatically qualify you for compensation. Far from it, you must table undeniable evidence tying your injuries to the at-fault party’s negligence. Otherwise, insurance companies will be quick to offer you a low-ball settlement or deny the claim altogether.

One thing you might quickly realize once the compensation process begins is that the insurance company isn’t concerned with your interests. Their adjusters and lawyers’ primary goal is to negotiate the lowest settlement possible to minimize their losses.

Under such circumstances, hiring a lawyer helps defend your rights. As their client, the lawyer looks out for your interests. An empathetic lawyer certainly desires to see you get better physically and psychologically.

Ideally, they will fight for the maximum possible compensation. The lawyer is also aware of statements and remarks to avoid during negotiations that might ruin the claim.

Lastly, having represented clients in similar cases, they know how to compute fair damages, especially those that aren’t straightforward, such as pain and suffering, loss of earning capacity, future medical expenses and wages, etc.

Most claims settle. However, if the insurance company fails to give adequate compensation, going to trial may be essential. If it gets to this point, the lawyer can file the lawsuit on your behalf and represent you until the case concludes.

The good thing about getting a lawyer from the get-go is that they are conscious of the statute of limitations. Essentially, the lawyer will set a timeline for settlement, giving allowance for timely filing of a lawsuit before the deadline lapses, should the claim fail to settle.

What Damages Can I Be Awarded in a Motorcycle Accident Claim?

The damages you receive in a motorcycle accident claim will mainly vary depending on the extent of your injuries. Sometimes the experience of your lawyer with similar cases can determine how much they secure from the negotiations. But generally, these are some of the damages you might receive.

The at-fault party or parties’ insurer(s) should compensate you for all the medical expenses you incur following the accident. These should cover costs for emergency room visits, prescriptions, rehabilitation, nursing care, to and from hospital travel expenses, surgery, scans, etc. You should also receive any medical costs that you might incur in the future (the lawyer should help you compute a rough estimate and add it to the final settlement).

The settlement should also cover any wages you have lost owing to your incapacitation. In addition, if the injuries are severe, keeping you away from work for long, you should add any potential employment benefits, such as promotion, to the settlement.

In the event the accident leaves you with a permanent or long-term disability, you should also recover your loss of earning capacity and future wages.

The insurance compensation should also cater to the repair costs of the motorcycle or other personal property.

Motorcycle accident claims also cover pain and suffering damages. The lawyer will help estimate an appropriate amount, depending on the severity of your injuries. Moreover, you may recover damages for the emotional and mental distress you may have endured.

If you’re pursuing compensation for a deceased loved one, the immediate family is entitled to damages for wrongful death. In case the person got hospitalized following the accident, the settlement should reimburse the hospital costs. The family should also receive burial and funeral expenses as well as compensation for lost wages.

If the court finds the at-fault party caused the accident out of gross negligence or malice, they may award punitive damages. This is intended to punish the defendant and deter them and others from such conduct in the future.

State law burdens personal injury claims with a time limit to pursue, within which you must file a claim against the at-fault party or parties. This limit is called the statute of limitation. If you fail to file a claim within a certain amount of time from the accident date (often two to four years depending on the jurisdiction), you cannot recover the damages afterward. In case you decide to bring a lawsuit past the deadline, the court has a right to nullify it.

However, the limit can be even shorter than this in some instances. For instance, if the accident was partially caused by the poor state of roads, you might seek compensation from the responsible government agency. Often, the statute of limitations in personal injury cases involving the government is much shorter than ordinary cases.

Another exception of the deadline might arise if a minor is involved. Overall, the statute of limitation varies from state to state. Getting a lawyer for your case will ensure you aren’t closed out, as they understand the specific requirements for your claim.

If you’re recovering from a motorcycle accident, we understand how challenging this time is for you. The physical pain amid the piling medical bills might have left you alone in emotional and mental distress.