Should I Hire a Construction Accident Attorney? 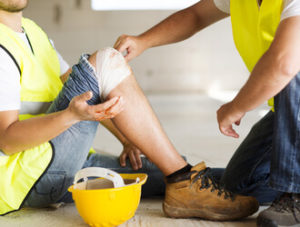 As one of the key employers in the United States, the construction industry provides many well-paying jobs with generous benefits and retirement packages. But, like any other line of work, there are downsides. Perhaps the greatest of these is that construction workers are significantly more at risk than others of being injured or killed on the job. In fact, construction workers fall among the top ten professions most likely to be injured on the job in any given year.

Workers injured on-the-job often face a long road to recovery. Even taking into account workers’ compensation, injured construction workers may still have a difficult time paying their bills and supporting their families. Because of this, construction workers may need to seek other options to obtain compensation, such as a personal injury lawsuit.

The thought of legal action may seem unsavory, with all the time and effort involved. But, while the legal system can be challenging and long to work through, by not filing a lawsuit, a construction accident victim may leave considerable sums of money on the table that both they, and their family, need to cover all of the short and long-term expenses and harms that come up. Hiring an experienced construction accident attorney to handle such a lawsuit is a good idea, for many reasons, as this article will explain.

It may be tempting to accept workers’ compensation and try to move on. But injured workers may be entitled to much more than workers’ compensation provides. Although injured construction workers generally don’t need to sue their employers, they can file a suit against any third parties who share responsibility for an accident.

Furthermore, injured workers can sue their employer under certain circumstances, including, potentially, in situations where the injury came from the employer’s intentional misconduct or gross negligence. Workers can also sue employees if they deny a workers’ compensation claim in bad faith or fail to have enough workers’ compensation insurance coverage.

It may be convenient to believe that if you’re injured on-the-job, your employer will always be quick to pay out your workers’ compensation claim. However, this isn’t always the case.

A denied workers compensation claim is almost certainly devastating to an injured worker; after all, the worker’s injury may render them unable to work at all, leaving them with no source of income. If their workers’ compensation claim is denied, a worker may have difficulty simply keeping a roof over their head. Many workers are unaware of their options through the legal system to fight a denied workers compensation claim. With the help of an experienced construction accident lawyer, workers can bring a lawsuit against their employer to secure the bare minimum relief they are entitled to.

As mentioned, injured construction workers generally don’t need to file a claim against their employers, barring certain exceptions. This is known as the “grand bargain” of the American employee-employer relationship. As explained by the Congressional Research Service, “under this grand bargain, workers receive guaranteed, no-fault benefits for injuries, illnesses, and deaths, but forfeit their rights to sue their employers. Employers receive protection from lawsuits but must provide benefits regardless of fault.”

Even if a worker can’t sue their employer, they can still sue any third-parties whose negligence or wrongdoing contributed to the worker’s injuries. For example, if a construction worker is injured when their chainsaw backfires because of a flaw in the saw’s design, they could potentially sue the saw’s manufacturer. They would file a product liability lawsuit against the manufacturer would claim that the manufacturer should pay for damages (the legal term for compensation) because it produced a flawed chainsaw that caused the worker’s injuries.

The worker in this scenario could potentially seek damages to recover for expenses and harms not directly covered by workers’ compensation. This could include financial hardship, medical expenses, loss of future earnings. They could also seek compensation for pain and suffering and other intangible harms.

Most lawsuits, including those involving construction accidents, do not go to trial. Instead, the parties settle outside of court. Settlements are more likely in construction accident cases in large part because it is beneficial to each side—the defendant avoids the time and expense of litigation and a potentially large damages order, and injured workers receive greatly needed compensation quicker. An experienced construction accident lawyer can ensure a worker doesn’t agree to an unfairly low settlement offer.

Construction workers perform inherently risky jobs to provide invaluable benefits to society. It’s only right that they receive fair treatment if they sustain an on-the-job injury. In addition to losing income, injured construction workers may face permanent disability, mental trauma, and high medical expenses. Hiring an experienced construction accident attorney dedicated to vindicating the rights of construction workers is the best way to maximize recovery from responsible employers or third-parties.

And keep in mind the importance of contacting an attorney as soon after a construction accident as possible—most states’ laws impose statutes of limitation, which create deadlines by which a victim must file a lawsuit or forfeit the opportunity. Most construction accident attorneys offer free initial consultations, so don’t hesitate to start making calls.