What Kind of Damages Can You Sue For? 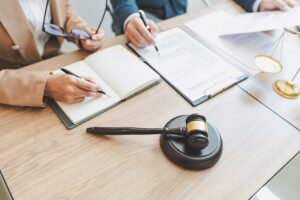 People injured by someone else’s carelessness or recklessness often want to know what compensation they can recover. The law calls seeking compensation for the expenses and impacts of an injury recovering damages. Read on for more information about the types of damages you can recover in a personal injury claim.

For more information about the personal injury claims process and how an attorney can assist you in recovering damages, request a free case evaluation from an experienced personal injury legal team.

What Are the 3 Types of Damages?

Compensatory damages often called damages are awarded to the plaintiff (claimant) in a personal injury case to compensate for the costs and impacts of the injury. To prove your personal injury claim, you are required to prove who was liable for causing the accident that resulted in your injury and show what types of expenses and impacts you have experienced or will likely experience in the future.

Economic damages also referred to as actual damages are for the expenses of the injury and other losses you incurred in the accident, such as the cost of repairing or replacing your vehicle in a car accident claim. Here is a look at some of the expenses that often appear in an economic damage claim.

One of the most considerable losses an injured person often faces after an accident is the financial loss attributed to the treatment of their injury. While their own insurance policies such as a health insurance policy provided through employment can be used to obtain care, the insurance company will likely want reimbursement for these expenses when you obtain a settlement or award.

The medical expenses a personal injury claim can compensate you for include:

In cases involving catastrophic injuries where the injured person can no longer earn an income or live independently, a victim can seek compensation to pay for long-term care or a personal assistant to help the injured person with daily living tasks. As explained by U.S. News & World Report, the cost of providing long-term care in a skilled nursing and rehabilitation facility can cost around $106,000 per year.

Another distressing expense for individuals injured in an accident is the income and other benefits lost while the accident left them too injured to work.

These losses can include:

If you are self-employed, you can still seek the recovery of wage loss by showing business records of the amount of income you typically earn from your business when you are not injured.

Some injuries result in permanent disabilities that can impact an individual’s ability to earn a meaningful income. Examples of the type of injury that often result in a loss of future earning capacity include injuries to the brain or spinal cord, which are the two organs that make up the body’s central nervous system and control all the body’s functions and involuntary responses.

Loss of future earning capacity does not only refer to cases where the claimant can’t perform any meaningful work for pay but also situations where the injury prevents them from earning what they did before the accident.

For example, if an individual worked in the construction business before suffering an injury that made them unable to perform the tasks of their previous position, but can work a lower-paying position, they can seek the difference between what they made before the accident and the income they now earn.

Those who cause accidents due to carelessness or recklessness can be held responsible for compensating their victims for the expenses related to the injury and the property damage they suffered in the accident. An example would be a car accident that totaled the claimant’s vehicle. The claimant can seek to recover the cost of replacing the vehicle.

#I. Physical Pain and Suffering

The psychological impact of physical pain and suffering does not just refer to the pain of the injury itself but also can refer to particularly painful treatments involved in the medical intervention of the condition.

For example, treating severe burn injuries often requires medical personnel to “debride” the wound. This treatment involves thoroughly cleansing the area and removing the dead tissue so that new skin can grow in its place. As one victim put it, the treatment is “just more unbearable than anything you’ve ever felt.“

In addition to the pain from the injury itself or the treatment of it, individuals who have suffered serious injuries often experience physical pain from injury complications, as well as ongoing pain from chronic or permanent conditions.

After suffering a serious injury, it is not unusual for victims to also struggle with mental health conditions related to the trauma, including post-traumatic stress disorder (PTSD), depression, or anxiety. In addition, many people suffer emotional distress in relationships due to the extraordinary changes that the injury has caused, such as financial hardship, the loss of employment, or changes to their relationship with family and friends.

#III. Loss of the Enjoyment of Life

Physically injured individuals often find that the injury impairs their ability to participate in activities they previously enjoyed. Often this impairment is permanent. An example of the loss of enjoyment of life would be an individual who was passionate about their hobby of hiking before suffering a traumatic limb amputation that resulted in the inability to participate in the hobby.

Whether physiological changes to the injured person’s body or the pain and mental anguish involved in the onset of a debilitating condition caused the condition, many individuals who have suffered a serious injury can’t have intimate relations with their spouse after the accident. Loss of consortium is a type of compensation obtained on behalf of the injured person’s spouse or romantic partner for the loss of physical intimacy and companionship they previously enjoyed with the injured person.

Some states cap some non-economic damages. Your personal injury attorney will advise you if this applies to your case.

In certain personal injury claims, the claimant has the option of requesting punitive damages. Punitive damages are different than compensatory or general damages, as courts don’t award them to compensate for the injury. Instead, courts award these damages to punish a defendant whose negligence was particularly reckless, or who injured a person intentionally or without regard to their safety or well-being.

One example of the type of claim in which punitive damages would be an option is a drunk driving case where the at-fault driver had an extraordinarily high blood alcohol content and repeated alcohol-related traffic offenses in their driving history. The driver knew based on previous convictions and training that driving under the influence was illegal and even dangerous but chose to do it anyway.

A well-known premises liability claim that involved punitive damages is the McDonald’s “hot coffee lawsuit,” in which a woman sued the popular fast-food chain after suffering severe third-degree burns from a cup of hot coffee she had just purchased in the drive-thru.

Because she was a passenger in a vehicle, she could not see the warning signs about the temperature of the coffee. She and her attorney proved that the restaurant routinely served coffee at a temperature that could result in third-degree burns in a matter of seconds and that the coffee had burned more than 700 other customers. As a result, a jury awarded her $3 million in punitive damages for the “callous disregard” that the restaurant showed toward the safety of its customers.

A Personal Injury Attorney Can Help You With Your Claim

One important service your personal injury attorney provides for you is determining the value of your claim. To do this, the attorney adds up the economic damages and determines a fair amount for non-economic damages based on the severity of your injury and its impact on your ability to earn an income.