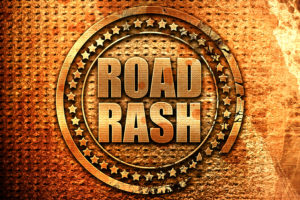 If you’re a motorcyclist or bicyclist, you’ve likely heard of road rash. It is one of the most common injuries associated with motorcycle and bicycle riding, but road rash can also occur in accidents that involve the ejection of an occupant from a vehicle or from an e-bike or a scooter, either privately owned or made available from online rental companies.

While generally regarded as only a minor injury, road rash can have serious and even life-threatening implications. If you’ve suffered road rash due to an accident that was caused by someone else, you should seek compensation for your injuries. An experienced motorcycle accident attorney can speak with you about the process of recovering that compensation.

What Is Road Rash?

Road rash is a common term for a skin abrasion that results from scraping the skin across a rough surface, such as pavement. While this type of injury can occur on any exposed part of the body, it is often seen on the body’s jointed areas, such as the elbows and knees, as well as bony areas, including the hands, face, shins, ankles, and shoulders. The different types of road rash include:

Those with road rash may feel little or no pain in the deepest part of the wound, while feeling extreme pain on the edges of the wound. This is due to damage to the nerve cells in the affected area. Other common symptoms of road rash include redness, swelling, and bleeding.

Many cases of road rash can be treated at home by taking the following steps:

If the wound is serious and medical treatment is required, some of the treatment that may be provided includes: 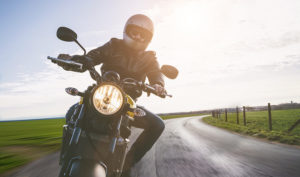 Any injury that breaks the skin barrier poses a risk of infection. Some infections associated with skin abrasions include:

If any of these symptoms are present, you are advised to seek medical treatment immediately. Certain factors may increase a person’s likelihood of acquiring an infection from road rash, such as smoking, being overweight, having a compromised immune system, narrow blood vessels, or high blood pressure.

Besides infection, road rash causes other potentially serious risks, including:

Skin graft surgery to repair areas that experience significant scarring involves replacing the damaged skin with healthy skin that is harvested from your own body in discrete areas, such as the buttocks or thigh. Doctors may also use skin from cadavers or animals or synthetic skin.

When riding a motorcycle, the simplest and most common way to prevent road rash from occurring is to remain aware of the conditions of the surface on which you’re riding and the gear that you’re using. Certain road conditions cause an increased risk of suffering an accident that could result in road rash, including: 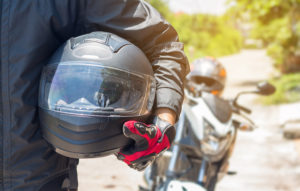 When it comes to clothing that can prevent road rash injuries, the more skin you have covered, the better off you will generally be, as clothing provides a layer between your skin and rough surfaces. Clothing should be loose enough so as not to impede movement, but tight enough that no loose pieces of fabric can get caught or tangled on anything as you ride. Motorcycle gear that may prevent road rash or lessen its severity includes:

Road rash is more frequent in warmer months when people are more likely to be riding the wheeled vehicle of their choice and more likely to have exposed skin. It is important—whether you’re riding a motorcycle, bicycle, scooter, or another vehicle—to cover your skin as much as possible with long pants made of a sturdy material (like jeans) and long sleeves.

If you suffered road rash or any other injuries due to a motorcycle, bicycle, or car accident that was caused by someone else’s negligence, let an experienced motorcycle accident attorneys help you understand your legal options.