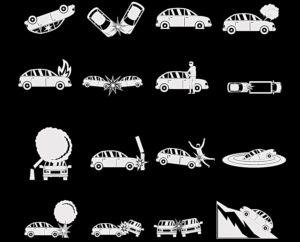 Car crashes are so common that we think of them as part of everyday life. Yet for those involved in them, each car crash is traumatic and dangerous.

Car insurance experts estimate that the average driver will file a claim for a car accident about once every 17.9 years or about three to four accidents during your driving life. Industry experts who analyze car accidents track many factors. Because accidents occur in so many different ways, with overlapping causes, statistics often look at contributing causes, rather than one cause of any given car accident. The goal of this type of research and statistics, such as that performed by the National Highway Traffic Safety Administration’s Office of Vehicle Safety Research, is to reduce crashes, injuries, and fatalities.

According to the National Highway Traffic Safety Administration (NHTSA), 37,133 people died in motor vehicle crashes in 2017, which is the first decline since 2014. Fatalities decreased for many types of accidents, including those involving impaired driving and accidents related to speeding.

Many types of accidents happen on Pennsylvania roads, but some are more frequent than others. Most accidents took place when drivers crashed into fixed objects, such as trees or guard rails. Other common types of accidents included rear end collisions and angled collisions. According to the National Highway Traffic Safety Administration, failure to stay in the proper lane, and failure to yield the right of way were also common, accounting for almost 15 percent of all drivers in fatal crashes. Common types of car accidents include:

Researchers also investigate the pre-crash event, which means the vehicle movements and the critical event that occurred immediately before a crash. Approximately 36 percent of the vehicles were turning or crossing intersections just before the collision. About 22 percent of the vehicles ran off the edge of the road and 11 percent failed to stay in their lane. About 9 percent lost control of their vehicle before the crash.

Driver behavior contributes to an overwhelming number of accidents. Overall, the following causes are some of the most common driver behaviors that contribute to many accidents across Pennsylvania and the nation:

Speeding is a top behavior factor for drivers involved in fatal crashes. In 2017, 9,717 people, or 26 percent of drivers who were involved in fatal crashes were speeding. In addition, the Insurance Institute for Highway Safety (IIHS) has found that increasing state speed limits over the past 25 years have caused nearly 37,000 fatalities. Not all speeding accidents happen on the highway. Driving too fast can be dangerous anywhere. Speeding accidents also happen when the driver is going too fast for road conditions, such as heavy traffic or slippery roads.

Driving Under The Influence

Alcohol, drugs, and medication affect brain functions such as judgment, concentration, coordination, vision, and reaction time, all of which are essential to good driving skills. DUI accidents are extremely dangerous. The impaired driver may be unable to mitigate the effects of the crash. Often, the drunk driver is uninjured while others involved in the accident suffer serious or fatal injuries—5,592 drivers, or about 11 percent of all drivers involved in fatal crashes, were driving under the influence.

Distracted driving claimed 3,166 lives in 2017 alone. Distracted driving accidents generally account for 9 to 10 percent of all fatal crashes in the United States. Distractions include activities such as talking or texting on cellphones, talking with passengers, eating while driving, adjusting vehicle controls, fiddling with the radio, or even daydreaming. Anything that causes you to either take your attention away from driving, take your eyes off of the road or take your hands off of the wheel is a distraction. Distracted driving primarily affects drivers aged 20 to 29.

Other statistics point out that 1 in 4 crashes often involve cell phone use, and that around 33 percent of drivers report having taken time to read or write a text while driving. Although it is not illegal to talk on the phone while driving, Pennsylvania law prohibits as a primary offense any driver from using “an Interactive Wireless Communication Device (IWCD) to send, read or write a text-based communication while his or her vehicle is in motion.”

Drowsy driving kills — it claimed 795 lives in 2017. Many people work long hours, have long commutes and complicated lives. Consequently, there are a lot of tired drivers on the road. Drowsy driving accidents often involve a single driver on the highway or rural road, who runs off the road, apparently without braking.

Errors of one kind or another contribute to almost every accident. Drivers may have obscured vision due to rain, glare, or other circumstances. Drivers may become confused and drive the wrong way down a one-way street, go straight in a turn-only lane, run a red light, or fail to obey other traffic signals or laws. Some driving errors may be considered careless or reckless driving, but such errors can lead to car crashes.

Reducing The Risk Of Car Accident Injuries And Fatalities

Everyone wants to avoid traffic accidents, but when they happen, safety devices can reduce injuries and save lives.

Were You Injured In A Pennsylvania Car Accident?

When you are involved in a car accident, your first concern should be your own well-being and getting the medical care you need. Then you wonder exactly what happened and who is responsible. If you have been injured in a car accident in Pennsylvania, you may be legally entitled to recover compensation from the at-fault driver. The car accident laws of Pennsylvania will govern your lawsuit.

Personal injury law is generally based on negligence. The legal theory of negligence is defined as “a failure to behave with the level of care that someone of ordinary prudence would have exercised under the same circumstances.”

It may consist of actions, but in some circumstances may also consist of omissions. Simply put, the law of negligence requires a driver to operate the vehicle with reasonable care. A driver who fails to do so is negligent and can be held liable for any resulting injuries. Damages may include claims for current and future medical expenses, lost wages or diminished employment opportunities, pain and suffering, or loss of affection (also called “loss of consortium”).

Pennsylvania’s car insurance law is more complex than most state laws. Pennsylvania has adopted a unique choice “no-fault” system for car accidents and insurance claims. When someone purchases insurance, they must choose between two types of insurance coverage. These are full tort or limited tort (no-fault). Under the no-fault option, in most cases, if the person is in an accident, they will not be able to file a lawsuit to get compensation. Instead, they will file a claim with their own insurance provider, even if they were not at fault.

What if you file a personal injury lawsuit to recover compensation for injuries suffered in a car crash, but you are partially at fault. In that situation, Pennsylvania’s comparative fault laws may affect your case. These laws dictate how much you can recover in a crash that you were partially to blame for, or even whether you will be allowed to recover anything, at all. Pennsylvania uses a modified comparative negligence law. This law allows you to recover damages as long as the amount of your fault was not greater than that of the other driver.

Recovering a large monetary award for your damages cannot give you back your loved ones or the life you had before suffering a severe injury. But it can help you face the financial consequences of your accident and give you the best possible future. All states have time limits for filing lawsuits.

Under Pennsylvania’s statute of limitations for cases that stem from personal injuries or property damage suffered in a car accident, you must file your lawsuit before it expires. These limits are applied strictly, so complying with this rule is critical because if you fail to file your case before the time limit ends you will probably lose your right to file a claim for the accident. Therefore, you should consult an experienced personal injury attorney as soon as possible.