What Do TBI Statistics Tell Us? 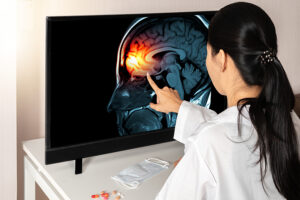 The CDC defines a traumatic brain injury (TBI) as a “disruption in the normal function of the brain that can be caused by a bump, blow, or jolt to the head, or penetrating head injury.” Traumatic brain injuries (TBI) account for about 30 percent of all injury deaths nationwide.

Each year, over 3.5 million Americans will suffer a brain injury. It’s the leading cause of death and disability in children, young adults, and the elderly. Approximately 52,000 people die each year due to a TBI.

A brain injury is different from many other injuries. If you break a bone, you may have difficulty getting around, but a TBI affects your brain, which may alter your mental capacity, personality, and the way you live every day.

A traumatic brain injury can happen to anyone. In recent years, there has been a large increase in concussions and other traumatic brain injuries in individuals ages 19 and younger, due primarily to sports or recreational activities. Those ages 75 and older also have a greater risk of TBI, largely due to falls.

What are the leading causes of traumatic brain injury?

According to the Centers for Disease Control and Injury Prevention, the main causes of traumatic brain injuries include:

Why are traumatic brain injuries called the “invisible injury?”

When we think of injuries, we often think of broken bones or bleeding. The signs of those injuries are clearly visible. Traumatic brain injuries are different. The signs of the injury are often subtle, and invisible, at least at first. The injured person may even make light of their symptoms and insist that they are “fine.” However, they may be struggling with headaches, confusion, or difficulty with hand-eye coordination.

Since many signs of brain injury are subtle, the injured person may not receive prompt diagnosis or treatment. The head injury may go undetected and undiagnosed. Also, TBI symptoms may appear days, weeks, or months following an accident and the initial treatment received in a hospital emergency department.

How does the brain get injured?

The human brain is a complex, amazing organ, but it is very vulnerable to injury. It weighs about three pounds and floats in fluid inside the hard, protective skull. It plays a critical role in every one of our functions, controlling many organs, our thoughts, memory, speech, and movements. Each brain lobe (frontal, temporal, parietal, and occipital) controls different functions, so the symptoms of a brain injury partly depend on the location of the injury.

Experts classify traumatic brain injuries as either mild, moderate, or severe TBI. In “mild” injuries, systems still typically persist for weeks or months (and symptoms can prove anything but “mild”). If the brain injury is moderate, the victim may be unconscious for approximately 20 minutes to 6 hours. If they are unconscious for more than 6 hours, doctors usually classify this as severe brain trauma. For moderate to severe brain injury, recovery may take months or years. However, the most severe brain trauma cases may result in permanent brain damage.

Different types of brain injuries include:

What are some common signs and symptoms of traumatic brain injuries?

Signs and symptoms can vary widely from person to person and from one injury to another. Some symptoms may appear right away, while others may not show up for days or weeks after the incident.

Below are some general indications of a brain injury:

What are common misconceptions about traumatic brain injuries?

Many people have mistaken beliefs about traumatic brain injuries.

An individual can have a serious traumatic brain injury, even though:

How do doctors diagnose and evaluate traumatic brain injuries?

Brain injuries are not like other injuries and so it is difficult to predict the outcome. In most types of injuries, the injury itself heals and functionality is usually restored. However, in the case of a traumatic brain injury, the brain itself might heal, but leave the functions that the brain controls permanently affected. Problems with functions such as speech or muscle coordination may not be quickly or easily fixed.

Brain imaging technology does not always detect traumatic brain injuries. That does not mean an injury did not occur. Brain injuries may be physical, but they also affect cognitive functioning. Neuropsychology is the field of medicine that deals with the study of the functional aspects of the brain. Neuropsychological testing helps diagnose the injury but also helps in planning the recovery and rehabilitation after the injury. Doctors may use a whole battery of tests to assess the cognitive, behavioral, and intellectual effects of the injury.

Doctors may use tests:

What treatments are available for individuals suffering from traumatic brain injuries?

Each person is unique and individuals may have different consequences from one injury to another, such as repeated concussions. Therefore, treatment plans are complex and differ from one person to another. Immediately following the injury, the injured person may require a hospital stay, possibly in Intensive Care.

After the initial treatment, the doctor may order medication to relieve symptoms. Therapy and rehabilitation may be necessary to regain motor functions, as well as speech, memory, occupational therapy, and other therapies designed to help the patient return to as normal a life as possible.

What are the financial costs of a traumatic brain injury?

Someone who has suffered a TBI may be unable to return to work for a long time. In some cases, they can never return to work or work at their previous job. Meanwhile, medical bills and other regular bills pile up and cause additional stress. Because the success of any rehabilitation program is different for each individual, predicting current and future expenses is difficult. The cost of caring for a person with a traumatic brain injury varies based on the severity of the injury, as well as the age and health of the injured person.

Some studies have projected average lifetime medical costs as follows:

These costs do not include emotional and physical issues. In addition, the cost of providing long-term care for a head injury survivor is between $600,000 and $1,875,000 over the patient’s lifetime.

What are the long-term consequences of a traumatic brain injury?

In addition to the financial costs of medical care, there is a personal cost to this type of injury, such as:

What elements are necessary to prove negligence with a brain injury?

Brain trauma is challenging to recognize and diagnose. Also, it can be difficult to prove. If you have suffered a traumatic brain injury due to someone’s negligence or wrongful actions, under Florida law, you may seek compensation.

If someone causes a brain injury from negligent actions or omissions, the at-fault individual or entity must compensate the victim and family members for all of the losses that result.

What kind of compensation is available from a brain injury lawsuit?

Compensation for brain injury claims varies widely. Typically, you may recover damages for all medical costs, including the cost of ongoing or future care, and lost wages. Recovery may also include compensation for pain and suffering. In certain cases, the court may award punitive damages.