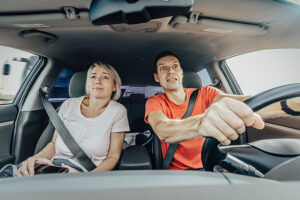 As humans, we sometimes commit errors behind the wheel. Some of those errors seem relatively minor: accidentally over-steering, for example, especially in poor weather conditions.

Other errors can lead to more serious problems out on the road: drinking and driving, for example, may lead to immense accident risk, as can driving while distracted.

Human errors typically leave the driver of the vehicle liable for any injuries that occur in an accident.

What does that human error mean for liability in an auto accident—and what types of errors contribute most to dangers out on the road?

Human Error and Liability on the Road

Accidents happen. Even the most careful driver can commit a minor error that ultimately results in severe injuries. In some cases, “human error” may even mean something that the driver never intended.

However, any time a driver commits an error on the road, even if that error does not involve a direct act of negligence on the part of the driver, it can leave the driver who caused the accident liable for any injuries sustained during the accident. When other factors contribute to those accidents, other entities may also share liability; however, most of the time, drivers bear ultimate liability for any decisions they make behind the wheel and any damages that result from those decisions.

The Most Common Human Errors Behind the Wheel

According to the NHTSA, three major human factors contribute to the greatest number of accidents each year.

Many drivers have a hard time keeping track of everything going on around them on the road. If they fail to properly look for hazards around them, it can cause serious accidents. Worse, in an improper lookout accident, the liable driver may fail to realize the potential hazard on the road until the collision occurs.

Since they take no actions to decrease overall speed or to avoid the collision, it can lead to more severe injuries, both because of the increased rate of speed and the potential location of the collision.

Improper lookout can occur for a variety of reasons.

Blind Spots. The larger the vehicle, the more space it may have in which another vehicle can disappear completely: a large blind spot in which the driver cannot see anything, including the actions of another driver. In a blind spot collision, the liable driver may never realize that another vehicle has drifted into that blind spot. The driver may try to change lanes or make a turn without ever realizing that another driver needs to use that space and that he needs to stay out of the way.

Big trucks, in particular, have massive blind spots that can prove difficult to avoid, especially in heavy traffic. Drivers of all vehicles, including big trucks, must exercise immense caution to ensure that they do not inadvertently strike a vehicle moving through their blind spots.

Hazards in the Road. Sometimes, roads may have hazards of their own that may make it difficult for drivers to see around them. Most of the time, cities take on the task of cutting back bushes or removing potential obstacles so that drivers can safely proceed to their destinations. In some cases, however, drivers may struggle to see the movement of traffic around them.

Failure to Look. Sometimes, a driver simply fails to look before pulling out into the road. A driver might travel the same path every day and assume that nothing will happen, only to discover on one fateful day that his inattention led to an accident with serious injuries. A driver might fail to look after noticing the sound of a motorcycle around him, or might not exercise adequate caution when looking around to determine whether he has enough space to merge into a different lane of traffic.

Distracted drivers may have no idea what has happened around them or what steps they need to take to avoid a potential collision. They may never see a hazard approaching on the road or realize that another driver has pulled out in front of them. In some cases, distracted drivers may drift out of their lanes and into others without even noticing it.

Manual Distraction. When driving, your hands should remain on the wheel at all times. If you take a hand off the wheel, or worse, take both hands off the wheel, it can slow your response time and make it harder for you to steer and control the vehicle.

If you have to take your hand off of a potential distraction, from the air controls for your vehicle to your phone, then get it to the steering wheel, you may add seconds to your response time—and in many potential accident scenarios, seconds can make an immense difference.

Many people struggle to pay attention to the road in front of them while engaging in another task, whether talking to someone else or attempting to change the settings on something within the vehicle. What turns into a “quick look” can quickly prove distracting enough to result in disaster.

Cognitive Distraction. Many people assume that if they have their eyes on the road and their hands on the wheel, they can navigate safely. Sometimes, however, cognitive distractions can impact even people whose bodies are locked onto the task at hand. Cognitive distractions pull the user’s attention away from the road.

In some cases, cognitive distractions may combine with either manual or visual distractions to create a more serious danger. In other cases, daydreaming, struggling with a potential problem, or even singing exuberantly along with the radio can all cause immense distractions for the driver.

When most people imagine distraction on the road, they blame smartphone use. With the wide array of anti-texting and driving campaigns, most drivers know that smartphones can involve all three types of distraction simultaneously: the driver’s hands leave the wheel to juggle the phone, the driver’s eyes leave the road to focus on the screen, and the driver’s attention wanders as he focuses on the elements of his message or the content he sees on the screen, rather than on the road ahead.

Distraction on the road, however, may mean many things other than just smartphone use. Many people try to multitask while behind the wheel: eating and/or drinking on the road, for example, which can prove particularly dangerous and distracting when eating something messy or when a drink falls in the driver’s face halfway through the cup.

Others may try to put on makeup or check a memo from the office. Even programming a GPS device, changing the station on the radio, or dealing with children and pets inside the vehicle can prove distracting enough to result in an accident with severe injuries. When possible, drivers should do their best to keep their full attention on the road, focusing on that task until they finish.

Speeding represents a way of life for many people. You may feel that by speeding, you can cut time off of your journey, leaving you with more time to engage in the activities you really enjoy or prevent you from facing the consequences of leaving a bit later than anticipated. At high rates of speed, however, drivers increase both their accident risk and the risk of substantial injury in an accident.

At high speeds, you have less time to respond. It takes time, even if you have your attention locked on the road, to recognize a potential hazard coming your way and respond to it. At high rates of speed, you may not have that luxury. Even if your reflexes kick in quickly, you may sustain severe injuries before you have a chance to avoid a potential collision. The faster you travel, the less time you have to react.

Unfortunately, speeding also brings with it several other dangerous behaviors on the road, including tailgating. When you tailgate another driver, you have even less time to respond. That driver may decrease his speed abruptly, ending in a rear-end collision before you have the chance to notice more than the flash of his taillights.

Speeding drivers may also have a greater likelihood of driving aggressively, swerving in and out of traffic, or accelerating and braking abruptly, which can make it more difficult for other drivers to predict their behaviors and avoid an accident.

High speeds increase the force behind an accident. When two vehicles collide, higher levels of force can mean more serious damage to the vehicle and its occupants. At a low rate of speed, a minor fender bender might cause little more than a few scratches or some paint transfer on the two vehicles, and the passengers in those vehicles might walk away without even really feeling the force of the accident.

At a high speed, on the other hand, the same basic collision could result in serious damage to the vehicle and severe injuries to everyone in it.

No matter how well-constructed the vehicle, the force of the accident has to go somewhere. Modern vehicles often crumple quickly in an accident to help absorb some of that force. As the force collides with the vehicle, however, that crumpling has to stop to protect the passengers in the vehicle.

As that force spreads through the vehicle, it may throw the passengers forward abruptly, resulting in serious force injuries. Some passengers may end up with traumatic brain injury, back and neck injury, or broken bones from that force alone. Others may experience severe force and the injuries that go along with them as they slam into the seat, dashboard, steering wheel, or windshield of the vehicle.

High speeds can also mean more shattered glass and twisted metal, leading to more cuts and lacerations and more severe injuries that passengers must contend with as they work their way out of the damaged vehicle. Often, a high-speed collision will render the vehicle so damaged that the driver can no longer move it safely.

Whether you suffered serious injuries in a car accident due to the top three reasons for collisions or you suffered injuries in an accident due to some other cause, you need legal representation that can identify the top causes of the accident and look for evidence that will establish everyone who bears liability for the accident. An experienced car crash attorney can help. After your car accident, an experienced personal injury attorney can teach you more about your right to compensation.