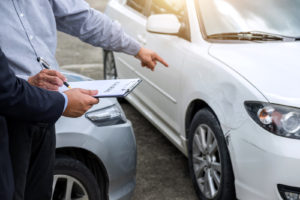 Florida has many multi-lane roads, particularly around Fort Lauderdale. The Florida Turnpike, I-95, and I-595 go right through the city. Add the high volume of beach and nightlife traffic to these roads, and you have the perfect recipe for sideswipe collisions. All it takes for a sideswipe to happen is for one driver to merge onto a highway or other multi-lane road without looking first.

Even two-lane roads see sideswipe accidents, though not as many as multi-lane roads and highways. Sideswipes on two-lane roads generally happen when a driver panics and merges too early while passing the car in front of them.

Because sideswipe accidents usually happen at high speeds, car occupants often suffer severe or catastrophic injuries, or even death. With the amount of traffic Fort Lauderdale sees, especially during spring break and the summer beach season, car accidents, including sideswipe accidents, are all too common.

Several driving habits and/or mistakes cause sideswipe accidents, including:

If a driver changes lanes or merges and causes a sideswipe accident because they did not make sure their actions would not interfere with other drivers, the driver could be charged with a non-criminal moving violation.

When a driver sideswipes someone, even if the initial impact is not severe, the momentum can cause the other driver to sideswipe someone else, get into a head-on wreck, spin out, swerve, or go off the edge of the road. When a driver forces another driver out of their lane via a sideswipe, the driver who was hit can end up damaging another person’s vehicle, running into a pedestrian or bicyclist, or crashing into an inanimate object. Any one of these situations can cause someone’s death.

A sideswipe accident with a parked vehicle usually happens when the stationary vehicle is parked in a roadside parking space or parking lot. Hopefully, if this happened to you, the at-fault driver left their contact information for you. Even though Florida is a no-fault insurance state and your insurance will most likely cover the accident, it is always better if the at-fault driver’s insurance covers it and takes the hit on the increase in premiums. If they did not, a Fort Lauderdale car accident attorney may help you track down security video footage to identify the other driver’s vehicle.

The Consequences of Sideswipe Accidents

Sideswipe accidents often do more than just damaging the vehicles involved. If anyone has their arm out of the window, that person could suffer serious or catastrophic injuries. Glass could shatter and cut the vehicle’s occupants. And, as mentioned before, the sideswiping driver might push the other vehicle into oncoming traffic, traffic alongside you, or even into a pedestrian or bicyclist. The second vehicle could end up damaging fences, lawns, mailboxes, transformer boxes for underground utilities, trees, and telephone poles.

Depending on the circumstances, the secondary consequences of the sideswipe accident can cause severe or catastrophic injuries or even death. In addition to going after the at-fault driver for damages, the accident victim may need to prove that the at-fault driver was responsible for injuries and property damage resulting from the secondary collision. The sideswiping driver should be held responsible for these damages since they caused the accident in the first place.

Taking photos of the entire accident scene can help investigators prove that the sideswiping driver is responsible for damages to your vehicle and person as well as any secondary damages.

After a Sideswipe Wreck

Secondly, if you are uninjured enough to do so, check on others involved in the accident, including the at-fault driver—unless the at-fault driver is volatile and you are concerned they may try to hurt you. If you can move around safely, take photos of the accident scene. Be sure to capture skid marks and other damage to the roadway from all vehicles involved. An accident investigator will determine the cause of the accident and who might be at fault by looking at several factors, including markings left on the road by either vehicle. Also, take photos of any property damage, such as broken fencing and mailboxes.

Obtain the contact, insurance, and registration information from other drivers involved in the wreck. Ask witnesses for their contact information and to describe what they observed.

Allow the emergency medical technicians to check you out, even if you believe you have minor injuries. The symptoms of some types of injuries do not manifest for hours or days. Once the police release you from the accident scene, seek immediate medical attention. Let your doctor know that you were in a car accident and that you would like them to check you thoroughly.

Working With the Insurance Company

Some people would prefer to settle their claims themselves. However, we do not recommend attempting this, especially if you suffered extensive damages. Insurance companies are in business to make money. Any claim they pay affects their bottom line. Even your own insurance company does not have your best interests at heart when it comes to paying out a claim.

Those who try to settle their own claims usually leave money on the table and don’t cover the cost of their injuries, or they end up getting a car accident lawyer involved later. Insurance companies look for any reason to deny your claim or offer you a pittance. One of their favorite tricks is to twist what you say to deny your claim.

What If the Other Driver Tries to Blame Me for the Accident?

The injuries you could suffer in a sideswipe wreck depend on several factors, including whether the at-fault driver just grazes you, hits you hard, pushes you into oncoming traffic, causes you to sideswipe another vehicle, runs you off the road, or causes you to hit a tree, pole, or other inanimate objects. Several other factors determine the severity of your injuries, including the size of the vehicles involved.

Special damages can include:

General damages, often referred to as non-economic damages, do not have an inherent monetary value. You cannot put a price on quality of life, pain and suffering, and other such damages. Nor does the money erase your injuries and other losses. However, the court orders the defendant to pay them in an attempt to make you financially whole again. The money can reduce the financial stress you suffer after an accident, wondering how you will provide for your family while you try to recover enough to go back to work.

Non-economic damages can include:

The court may order punitive damages in the hopes that the defendant will not repeat the actions or inactions that caused the other person’s injuries. The state could also criminally charge the defendant if their behavior was criminal. For example, a drunk driver might face charges in criminal court for driving under the influence and might also have to pay punitive damages for causing severe injuries in a car accident because they knew or should have known that they were too drunk to drive without putting someone else’s life in danger.

Contact a car accident lawyer today to find out which damages you can seek for a sideswipe accident.