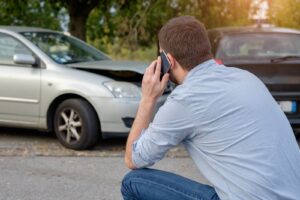 Motor vehicle accidents are known for their catastrophic repercussions, including devastating injuries, excruciating pain, and astronomical medical expenses that can forever impact a person’s life. That is why, following one of these horrifying accidents, one of the first things people want to know is who was at fault for their accident and what legal options they have in these situations.

For these reasons, we have prepared the below guide. In it, we will go over some of the more common accident scenarios that individuals experience in Fort Lauderdale. We will also discuss whom you can hold at fault for these accidents, and the steps you can take after these collisions to establish liability and fight for the compensation you deserve.

A rear-end collision is the most frequently occurring type of motor vehicle crash, accounting for almost 29 percent of all crashes and often resulting in a significant number of injuries and fatalities every year.

These crashes tend to result when a motor vehicle crashes into the rear of another car, usually because of inattention, distracted driving, tailgating, worn pavement, or reduced traction due to wet weather.

However, when it comes to liability for this accident, there can be numerous individuals responsible for the collision, including:

A sideswipe accident, also known as a blind spot accident, is a type of collision where the sides of two motor vehicles make an impact while moving in the same or opposite directions. These crashes can happen between two moving vehicles or result when a car sideswipes a stationary object like a guardrail or a parked car.

However, before your lawyer can establish fault, they must examine numerous factors, such as whether:

A T-bone accident occurs when one motor vehicle strikes the side of another, forming the shape of a “T” at the point of impact. However, due to the lack of side protection in most vehicles, these collisions are often considered one of the most dangerous accidents on the road.

T-bone crashes frequently happen at intersections when one motorist disregards a red light or stop sign and drives through it when another vehicle crosses the intersection.

As a result, in Fort Lauderdale, these accidents frequently happen at some of the more dangerous intersections in the area, including:

However, when trying to figure out fault for a T-bone accident, attorneys must look at the actions of all the drivers in this accident. Maybe one motorist failed to yield to the right of way, ignored a stoplight or red light, or tried to make a quick-left across heavy traffic and caused the crash.

If the T-bone collision resulted from faulty car parts, then the car’s manufacturer may bear liability for the crash and any resulting damages and injuries.

A head-on accident, also referred to as a frontal crash, occurs when the front ends of two motor vehicles hit each other when traveling in opposite directions. Although these collisions are rare compared to other car accidents, they are often considered the most deadly of all crashes. Insurance Information Institute statistics show that only 2 percent of nationwide crashes were head-on collisions. However, these accidents accounted for over 10 percent of all fatal crashes.

In a head-on crash, the party that will most likely be held at fault for the accident is the one that caused the crash due to a lack of sound judgment or behavior. For instance, if a motorist was distracted while driving, drifted into oncoming traffic, was driving their vehicle while intoxicated, or was not paying attention to the road signage and went down a one-way road in the opposite direction, they can be found at fault for a head-on crash.

That is why when it comes to liability for these accidents, as a general rule, the motorist who turned left caused these crashes. However, there are some exceptions to this presumption, and depending on the circumstances, not every left-hand turn accident will be caused by the person making the left-hand turn. For example, fault can shift away from these motorists, if another driver runs through a red light, the accident is the result of another vehicle speeding, or if the driver turning left has problems making the turn due to other circumstances, such as car maintenance issues.

A single-vehicle collision is an accident that causes damage to only one vehicle. This means that even if another automobile contributed to the accident, but the crash only involves one car, it is still considered a single-vehicle accident.

Although the driver in these accidents is the one most often at fault for these crashes, notable exceptions to this rule include:

For instance, these crashes frequently occur in these locations when:

Typically, if a driver strikes a stationary vehicle in the parking lot, the motorist in motion will often bear responsibility for the collision. This can include cars backing out of parking spaces too quickly, motorists who strike parked vehicles, and drivers who run into pedestrians. However, if two vehicles ran into each other as they were moving, the motorist who failed to abide by the rules of the road will often bear responsibility for the collision.

Determining fault following a motor vehicle accident is not always easy, and many elements and factors may contribute to this liability. Fortunately, there are things you can do after this accident that can not only help keep you safe but allow you to secure documentation and evidence that can help you prove that another person was responsible for your accident.

For these reasons, following a Fort Lauderdale car crash, you should consider doing the following:

After a car collision, you should call 911 as soon as possible. Not only is this the fastest way to get the accident on record and alert the police of the collision, but it is also the quickest way to notify emergency medical personnel that you or another person require immediate medical attention.

Once these authorities get to the scene, they can get you the medical help you need, as well as perform a preliminary investigation into the accident and document their findings in their police report. If you decide to pursue legal action, this report can provide you and your lawyer with valuable evidence regarding what happened and who was at fault for the incident.

#2. Gather Evidence From the Scene of the Crash

If the scene is safe and you do not require immediate medical treatment, you should try to collect as much evidence from the crash scene as you can. This should include photos and videos of your visible injuries, the vehicles involved in the accident, the placement of these vehicles on the road, the damage to the vehicles, the weather conditions at the time of the accident, traffic signs near the area, and any other evidence that can help show what happened.

If there were people at the scene, who saw the accident, you should try to get their names and contact details. These individuals can often provide you and your attorney with helpful information regarding the crash, and their testimony can back up your claim.

Although securing evidence following your car accident can be helpful for your claim, if your injuries or the severity of the accident prevents you from getting this documentation, pictures, and videos, do not worry. Once you retain an experienced Fort Lauderdale car accident attorney, these legal professionals can take on this legal fight on your behalf and help you go after the financial damages you deserve.

For instance, once hired, these lawyers can: