Who Decides Who Is at Fault in a Car Accident? 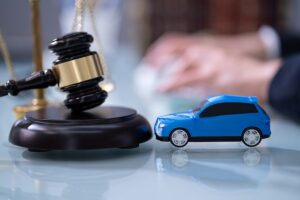 The concept of fault plays an important role in car accident cases. The party at fault for a crash often (although, as explained below, not always) has a legal obligation to pay for the damage the crash causes to others. That party may also face other forms of liability, such as being charged with a crime, facing administrative penalties, or personal consequences, for being at fault.

But who gets to decide who is at fault in a car accident? The short answer is that many parties judges and juries, victims and their lawyers, insurance companies, and law enforcement, for example all play an important role in that determination, and can often reach their own conclusions and agreements about fault that have unique and important consequences.

Let’s look at the concept of fault and who decides it in a car accident case.

The Many Ways Fault Matters in a Car Accident

In a car accident, “fault” refers to the decisions or actions that contributed to the crash. Fault is a result of intentional or unintentional conduct. It can lie with a person directly involved in an accident (a driver, for example), or with individuals or entities whose past actions or current interests are related to the crash in some way (such as an automotive manufacturer or a driver’s employer).

After a crash, different parties are interested in determining fault. Here are some important ways fault matters.

Throughout the United States, fault determines who has civil legal liability for a car accident that is, who may have an obligation to pay damages to others harmed by it. That’s because, in our system of laws, anyone who does something unreasonably dangerous that hurts someone else is responsible for that harm

In car accident cases, the most common way of deciding someone is at fault and owes damages is finding them negligent.

In a nutshell, a negligent person:

In addition to negligence, the law can also assign fault in other ways. For example, the law may deem someone who causes an accident intentionally at fault. And it deems an automotive manufacturer at fault for an accident merely if that manufacturer sold a defective product that contributed to causing the accident.

Deciding who is at fault under the law typically happens in two ways. In a lawsuit filed by a party harmed by the accident, a judge and/or jury can decide fault after reviewing evidence and hearing witness testimony in a trial or similar proceeding. Or, parties to that lawsuit can resolve the question of fault in a settlement agreement, instead of leaving that determination to a judge or jury.

A decision of legal fault for a car accident broadly binds everyone whose rights and interests are affected by the crash. Even individuals, businesses, and other entities that are not parties to a lawsuit in which fault is decided, for example, may need to abide by that decision.

The decision of who is at fault for an accident can play an especially important part in determining whose auto insurance policy pays for an accident, and how much it will pay. In most states, drivers must carry a minimum amount of auto liability coverage, which covers the cost of accidents in which those drivers are at-fault. After an accident, insurance companies and (if necessary) the courts investigate the facts and circumstances to decide who was at fault and, in turn, which insurance policy must pay for the damages the at-fault driver caused.

In some states, drivers must instead carry no-fault insurance, also known as personal injury protection (PIP) coverage. This insurance covers drivers against their own injuries in an accident, regardless of who was at fault. In these no-fault states, the decision of who was at fault for an accident typically only matters in accidents that result in severe injuries and large amounts of damage.

An insurance company typically has the right, under the terms of the insurance contract, to decide fault for a car accident. But state civil and insurance laws broadly give the covered parties the right to challenge that decision in court, if they disagree with it.

Fault for an accident also plays an important role in criminal law. When a crash results in severe or fatal injuries, law enforcement, and prosecutors may investigate to determine if the driver or other party at fault violated a criminal statute in causing the accident. If so, that at-fault party may face criminal charges and, potentially, sanctions like fines or imprisonment.

Being found criminally at fault for a car accident usually also means the at-fault party is also liable civilly for damages to the crash victims, and that determination is broadly binding on others.

Administrative agencies, such as state bureaus of motor vehicles and professional oversight bodies, may take fault for an accident into account in determining how to enforce regulations against an at-fault driver or another party. An agency that finds a driver at-fault for an accident may, for example, suspend or terminate that driver’s license, or may prohibit the driver from operating certain types of vehicles or engaging in certain activities (such as carrying passengers).

Agencies often investigate to decide fault. Their decisions can constitute persuasive evidence that someone is civilly or criminally liable for a car accident, but those decisions usually aren’t binding on anyone beyond the scope of the agency’s jurisdiction. For example, a taxi and limousine commission’s decision to suspend a limo driver’s chauffeur license based on an agency investigation that found the driver at fault does not prevent others, like insurance companies, courts, or prosecutors, from reaching different conclusions about fault for the same accident.

Finally, fault for a car accident can affect people in numerous personal ways. If a driver’s employer thinks the driver caused an accident, the employer may fire the driver. When a driver’s actions harm someone they know, it may cause permanent changes in friendships or business relationships.

To summarize what we’ve learned so far, the concept of fault has importance in many aspects of a car accident. Many parties can reach conclusions about fault, with each having potential impacts for the at-fault party, the accident victim, and others who may have a legal or financial interest in what happened.

What types of information may those parties use to evaluate the question of fault? It varies depending on the circumstances of the crash.

Generally speaking, however, all of the evidence listed below can have a major impact on a fault determination.

This is not a comprehensive list. There’s no telling what kind of evidence may provide useful information about the root causes of a car accident. That’s why experienced car accident lawyers and the professionals they work with often dig deep into the available evidence to identify potential explanations and contributing factors that others may have missed. The more detailed and complete the understanding of the cause of an accident, the more powerful the case.

Victims of car accidents often want to know what they can do to help figure out who was at fault for the car accident that left them injured and in pain. Every crash is different, so there’s no single right answer to that question. But generally speaking, taking the steps below can often help in the process of pinpointing the at-fault party.

You probably did this at the accident scene, but if not, be sure to report the accident to your local authorities. State law virtually always requires you to report any accident to the police that resulted in personal injuries or anything more than the most minor property damage. By reporting the accident, you ensure that law enforcement will investigate and produce an accident report. That report can often provide important information to others about how the accident happened and who bears responsibility for it.

In the days or weeks after a car accident, you may hear from a representative from an insurance company that issued insurance to someone else who was involved in the accident. If you receive a call like that, be careful. The caller may seem friendly, but the purpose of the call is not to help you. Instead, it’s to gather information from you that the insurance company can use to argue that its policyholder was not at fault for the accident in other words, that it doesn’t owe you any money.

You usually do not have any obligation to speak with someone else’s insurance company about the accident. And even if you do have to speak with them eventually, you can always delay until you have a skilled car accident lawyer on your side to help you navigate that process. So, if someone else’s insurance company calls asking questions about the crash, politely decline and follow the final suggestion below.

When it comes to deciding who was at fault for a car accident, having a lawyer on your side makes a huge difference. A lawyer’s job is to represent you and gather evidence and information to prove that someone else caused your crash and that you deserve financial compensation for your injuries.

The sooner you have a skilled attorney on your side advocating for that outcome, the better your chances of securing the maximum payment you need to pay for your medical care, damaged property, and the pain and inconvenience of your car accident injuries.

So don’t delay. If you suffered injuries or lost a loved one in a car accident, contact a car accident lawyer as soon as possible for your free case evaluation.