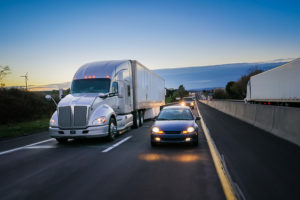 A car became partially wedged under a semi-truck in Holmesburg. Officials stated that the accident occurred when the semi was attempting to make a wide right turn from the left lane into a parking lot. The car, which was in the right lane, failed to stop for the truck and become caught beneath its wheels.

Unfortunately, as horrific as this type of accident is, it’s not uncommon, particularly in urban areas where turn lanes are often narrow and offer limited space for trucks to maneuver. In fact, this type of commercial vehicle accident is common enough to have its own nickname: squeeze play, or right turn squeeze. It is also common enough that truck drivers are required to signal 100 feet before making a turn, and they must display a warning sign on their truck so that others are aware that it makes wide turns.

How Does a Wide Right Turn Truck Accident Happen?

As explained by the Federal Motor Carrier Safety Administration, large commercial trucks are unable to make turns or maneuver as easily as other types of vehicles due to their size. Large trucks are up to 14 feet long and have a high center of gravity that prevents them from making the same sharp turns as other vehicles without tipping over. These trucks require 55 feet of space in which to turn. The term “squeeze play” refers to a vehicle that gets squeezed or crushed between the truck and the curb or, as in the news story above, gets wedged beneath the truck tires during the turn. Some of the reasons this occurs include:

Another type of accident involves a vehicle in the lane to the left of the truck getting struck by the truck as it makes the wide right turn. Because these trucks are so difficult to maneuver, particularly in crowded spaces, the driver often veers the truck to the left to make the turn. If there is a passenger car in the left-hand blind spot, the driver risks running into it as it swings around the turn.

A look at national news stories can give you a better glimpse of how these accidents occur and the damages that they cause. Here are five real-life examples of wide right turn truck accidents:

Who Is Liable in a Wide Right Turn Truck Accident?

Liability is a legal term for determining who is at fault in an accident. Fault may be assigned to more than one individual, particularly in the case of a truck accident. Liability is proven in court by establishing that:

Some examples of potential liability in a wide turn truck accident include:

Does the warning sign posted on the truck about how it makes wide right turns release the truck driver from liability? Certain types of liability, yes. If the truck driver is engaging in other negligent behavior, such as forgetting the turn signal or attempting to take the turn too fast, then he or she may still be found liable. 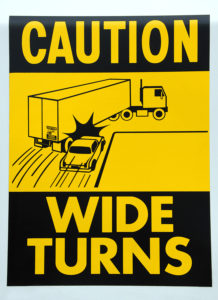 While it is impossible as a driver to completely eliminate all risk of accidents, as there are so many factors out of your control, there are some things you can do to avoid this type of collision. Here are some tips:

What Should I Do if I Was Injured in a Wide Right Turn Truck Accident?

The most important thing you can do after suffering injuries in an accident involving a truck making a wide right turn is to focus on your recovery. Injuries from this type of accident are often extremely serious. Another important early step is to talk to an experienced truck accident attorney, who can:

Injured in a truck accident? Contact an experienced truck accident lawyer to discuss the details of your case and determine your eligibility to seek compensation for your injuries.