Do Motorcycles Stop Faster Than Cars?

Riders have many reasons why they prefer motorcycles to cars. They can save some gas money, and the size allows for improved maneuverability. You might see a few different types of motorcycles in the city or on the highway.

When someone drives, they need to maintain an adequate distance from other cars. Regardless of the vehicle, time and space are necessary when you need to brake. Some people wonder if motorcycles actually stop quicker than cars. The short answer, YES motorcycle can stop quicker than most vehicles on the road mostly due to the lower mass but this increased braking ability can also indirectly cause some serious accidents. Learn more from our motorcycle accident lawyers below.

What Motorcycle Accidents Can Other Drivers Cause? 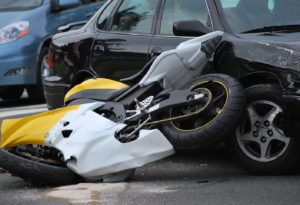 Around 88,000 motorcyclists suffer from injuries due to accidents every year. A traumatic event can occur at any time for any reason. Potholes, tree branches, distracted drivers, and ice make the roads dangerous for riders.

Many situations involve a car and a motorcycle.

In some cases, improper street maintenance and mechanical failures are causes of accidents. However, driver error is the primary factor for injuries. For instance, a person could misjudge how much space they need to stop.

What Is a Motorcycle’s Stopping Distance?

Like cars, motorcycles have a stopping distance riders need to keep in mind. The process begins when you notice a change and need to stop. Generally, an alert motorcyclist takes an average of 0.75 seconds to react. The motorcycle will have traveled a considerable number of feet within the second.

The rest of the distance passes by once the rider applies the brake. The length depends on several factors, and a couple includes your speed and changes in road elevation. For example, 30 miles an hour creates a stopping distance of 75 feet.

A rider needs 29.5 feet to think and almost 46 feet to brake to avoid a collision. The length is equivalent to six cars. On the highway, a person going 60 miles per hour would need approximately 240 feet to stop safely.

Road elevation and conditions can affect how long you need to brake while on a motorcycle. Of course, the parts and features of the bike influence the stopping distance. A person could have an inefficient brake or suspension system.

Does a Motorcycle or Car Brake Faster?

People may compare the positives and negatives between motorcycles and cars. One aspect is about which type of vehicle stops sooner than the other. Some people believe motorcycles have the advantage due to their weight and size. The answer can depend on the vehicle brand and the efficiency of parts.

Surface traction and motorist skills play a part in the stopping distance. A car could take longer to stop at specific speeds but are quicker at other times. On average, motorcycles take a little longer to stop than cars. Motorcycles need approximately 18 percent more space than cars to brake.

A car only requires a single pedal, and an electrical system assists with the maneuver. Motorcyclists have to worry about two braking systems to the front and rear. They have to apply the correct pressure to both ends. The reason is the wheels could lock up and make the bike unstable. However, some motorcycles incorporate an anti-lock braking system to prevent locked wheels.

The size and tread of tires can influence braking speed. A quality tire has sufficient tread for traction to prevent skidding. Therefore, vehicles can stop sooner with enough traction. Motorcycles only have two tires, but a car has four. Additionally, a car’s wheels generally are wider and larger in diameter.

Even though motorcycles weigh less, cars have more friction. Regardless of which vehicle stops faster, driver negligence may increase the risk of an accident.

The Controls of a Motorcycle

A motorcycle has several more controls a rider needs to be aware of on the road. One of them is the clutch lever. When a person pulls the lever inward, the rear wheel loses power. The clutch prevents engine stalling, and the rider uses the control to help change gears. A few motorcycles are automatics and do not have a lever.

The indicators, or signals, alert other motorists of the bike’s intentions. A driver can prepare in case the rider needs to change lanes or make a turn. The person has to manually turn the indicator off once they no longer need it.

Like other vehicles, a motorcycle has a loud horn. The horn alerts drivers you are near them if you believe they have not spotted you. Of course, function brings someone to attention if they become distracted when the light turns green.

Motorcycles have a switch to manage the headlight. A person can flip between a high beam and a low beam. The panel lets the rider know if they have activated the high beam. Usually, the symbol is a small blue light. Another function is the headlight flasher, and it warns others of your presence like a horn.

On the handlebar, the right grip controls the throttle. The throttle affects the speed of the motorcycle. If you twist the grip toward you, you begin to accelerate. You would turn the throttle away to help slow down the engine.

The foot controls include the gear selector, rear brake pedal, and kick-start lever. The gear selector changes the gear to match the speed you wish to go. Typically, the control is on the left side. Meanwhile, the rear brake is usually on the right side.

The kick-start lever is part of the process of turning on the motorcycle. You need a sufficient amount of pressure for a successful attempt.

The Stopping Distance of a Car

On the other hand, a driver takes somewhere between 0.5 and .75 seconds to react to a hazard. Another 0.75 seconds pass while the foot moves to and presses down on the brake pedal. Like motorcycles, the stopping distance can depend on the vehicle model, road conditions, and driver attentiveness.

Ice or rain can make a vehicle take longer to stop fully. Higher speeds require greater distances between cars. At 60 miles per hour, the overall stopping distance for a small car is about 130 feet. Sports cars need 120 feet, and small SUVs have a stopping distance of about 132 feet.

On the highway, a driver can misjudge if the space between them and another car is enough. They could become negligent if an accident occurs. Some people move their foot lightly to the brakes at the first indication they have to slow down.

FOUR Parties Who Could Be Held Liable in a Motorcycle Crash?

Cars are the negligent party in many motorcycle-related accidents. A driver has a duty of care to be alert to their surroundings. They have to keep an eye on mirrors and blind spots to avoid a collision with a motorcyclist. Speeding, alcohol, and erratic driving make a driver liable for a rider’s injuries.

You would need to collect the person’s name, email, phone number, and insurance information.

The creator of a vehicle part can be at-fault for a malfunction. Perhaps, the car’s steering wheel or engine stopped working and caused a crash. The motorcycle could have had a faulty anti-lock braking system instead. You can get reimbursement if you can prove the manufacturer allowed a flawed vehicle to enter the market.

If a government employee crashed into you, you could hold the agency liable. Many jurisdictions waive immunity for local and state governments for motorcycle accident cases. Injured victims could have the right to file a claim if the city’s roads caused the incident. A municipality must keep streets free of potholes and reasonably safe for everyone.

You might have been a passenger on a motorcycle when the collision occurred. You could have sustained injuries and gained medical debt because of the rider. The person driving the motorcycle could have behaved recklessly. You can file a compensation claim, but you would need to prove negligence.

Can You Sue for a No-Contact Crash?

While a driver caused someone’s injuries, their car might not have physically touched the motorcycle. In some cases, a vehicle makes the motorcycle take an evasive maneuver only to crash elsewhere. A driver could have cut you off, and you swerved into a fixed object.

You might steer out of the way if someone suddenly stops in front of you. Some people change lanes without looking and run riders off the road. Despite a motorcyclist’s best efforts, they run into a tree, pole, or another car. As a result, they are out of work for multiple days while they recover.

While the driver did not touch you, they can remain liable for the accident you endured. If you can identify the vehicle, you can start a lawsuit for compensation. You may need to use your uninsured motorist policy in the meantime.

If you locate the driver, you have to find evidence to prove their negligence. A motorcycle accident lawyer can help you get the money you need after a no-contact collision.

Insurance companies tend to low-ball the victims of motorcycle accidents. The other party’s insurer expects the individual to want to settle as soon as possible. The adjuster may hope you do not know the value of your claim.

The settlement likely will not cover all your current and future accident-related expenses. As a result, you should not accept the insurance company’s initial offer. Once you sign the papers, you will be unable to pursue further legal action against the liable driver for the same accident.

Instead, you should have your attorney deal with the adjuster. They review offers and advise you if you should agree or not. Lawyers know how to negotiate for maximum compensation.

What to Do After a Hit-And-Run

When the at-fault party flees the scene, a potential claim becomes more complicated. You are unable to collect their name and insurance information. The process to track down the motorist could take a while, and you might be unable to identify them. Additionally, your insurer likely may challenge your claim.

If a driver flees the accident, the first step is to get to a safe location away from traffic. Call the authorities to report the crash and wait for help to arrive. Record any qualities you can remember about the vehicle. Tell the police the color, make, model, and other details.

Even a part of the license plate number can help the police start their search. Another party could have been around to witness the crash. You can ask them what they remember about the hit-and-run car. Afterward, you should visit a hospital to treat your injuries.

Since the liable driver fled, you need to contact your insurance company. If you have uninsured motorist coverage, you can use the policy to help cover expenses. You might face obstacles when you try to obtain financial support.

The next step is to find a motorcycle accident lawyer. An attorney assists you in the investigation of your case. They can file a case against the other driver’s insurance company or an uninsured/underinsured motorist claim if the other driver left the scene, had no insurance, or lacked a policy that will cover your damages. Your lawyer goes over your other legal options as well, and all at no cost to you.