The Fort Lauderdale car accident lawyers at The Levin Firm has the experience and knowledge to fight for you in your rear-end collision case in Fort Lauderdale. 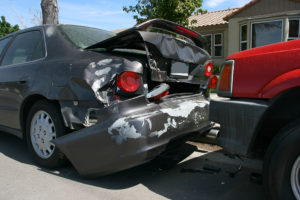 Reports from the National Highway Traffic Safety Administration (NHTSA) found rear-end collisions to account for 23 to 30 percent of all traffic collisions in the U.S. This statistic includes the Fort Lauderdale area and Broward County, where rear-end collisions are commonplace.

In Fort Lauderdale, one of the most common scenarios leading to rear-end collisions involves searching for nearby locations, such as shopping centers. When drivers are unfamiliar with the Fort Lauderdale area and looking for a specific location, they become momentarily distracted, resulting in rear-end collisions. Locations like The Galleria often see high traffic levels and rear-end crashes, with this shopping center alone containing more than 100 retail businesses and restaurants.

Specific causes of rear-end collisions in Fort Lauderdale and elsewhere include:

Another cause of rear-end collisions is distracted driving, which involves a variety of distractions that take drivers’ attention away from the road. For instance, drivers may text or talk on the phone, eat or drink, change the volume on the radio, or look at objects on the side of the road while driving. These activities easily lead to rear-end collisions when drivers aren’t looking at the road ahead.

When fatigued drivers drive behind another vehicle, their reaction time slows. Even if they have enough space to slow down, their fatigue may prevent them from noticing that the vehicle ahead has slowed or stopped before crashing. Fatigued driving is potentially as dangerous as drunk driving, with studies finding that drivers with over 18 hours of sleep deprivation experience effects similar to those with a blood-alcohol concentration of 0.05 percent. For comparison, the legal limit in the U.S. is 0.08 percent.

Driving while under the influence of drugs or alcohol also causes rear-end collisions. Even small amounts of alcohol significantly impair judgment and slow down a person’s reaction time. Impaired driving also leads to poor judgment, where drivers fail to give enough space between them and the vehicle ahead.

Certain weather conditions such as ice, snow, rain, and fog can cause drivers to lose visibility or traction, potentially causing rear-end crashes. Drivers may travel too fast on slick roads and slide into the vehicle in front even when attempting to stop. Meanwhile, poor visibility can prevent drivers from seeing far enough to notice if the driver ahead has stopped or slowed down.

How To Determine Liability in a Rear-End Collision?

If victims of rear-end collisions decide to file a claim or lawsuit against another driver, they must prove negligence. In most rear-end collisions, the rear driver is liable for the accident, often because they fail to give enough space between vehicles and fail to stop in time due to negligence. However, the rear driver isn’t always responsible for these accidents.

You must determine who will pay for the damages following an accident when proving liability. Figuring out liability entails determining whether a driver was negligent and to what degree their negligence contributed to the accident.

In some cases, the front driver may be negligent in a rear-end collision if they engage in negligent driving behaviors.

For example, you may blame the lead driver if they:

Claimants must prove the other driver was negligent, that this negligence caused the rear-end collision, and that the collision resulted in definable damages. This process can be difficult, particularly if a rear-end collision involves complexities such as multiple drivers and serious damages. Consulting with an attorney will help you determine how to prove negligence and seek compensation.

Although most rear-end collisions don’t result in serious injuries, in some instances, they can. Individuals can sustain severe injuries and permanent damage even in a low-speed crash.

Some common injuries sustained in rear-end accidents include:

If you file a claim or lawsuit against another driver following a rear-end collision, you must prove that you sustained certain damages. The damages that may result from rear-end collisions include economic, non-economic, and punitive damages.

In accident cases, economic damages include those with a specific monetary value. This value makes them easy to calculate to help determine how much a case is worth. Economic damages in rear-end collision cases may include medical bills, repairs for vehicle damage, lost wages due to time taken off from work to recover, lost earning capacity due to lost wages, and other financial losses.

Non-economic damages are not as easy to calculate and involve a victim’s emotional distress from the accident. Non-economic damages include physical pain, mental distress and anguish, loss of enjoyment of life, loss of relationships or consortium, and harder-to-quantify effects. Victims may prove these damages by maintaining a journal and recording their experiences after an accident.

In rare cases, the court may award punitive damages if a driver was unusually negligent in causing an accident. Economic and non-economic damages help compensate victims for damages, but punitive damages punish defendants. The goal is to prevent similar behavior from taking place in the future.

With complex cases, it’s often challenging to determine the damages involved in an accident. To help you determine how much your case is worth and pursue full compensation, contact an experienced accident lawyer.

If you choose to file an insurance claim after a rear-end collision, remember that Florida is a no-fault state. This means your first step is to report the accident to personal injury protection (PIP) insurers. The insurer will then begin the claims process. If an individual chooses to file a lawsuit for their injuries, the damages involved must exceed the limits of the PIP policy.

In addition, you must prove that you sustained “serious injuries” if you wish to file a lawsuit.

The characteristics of these injuries are:

If your insurer makes an offer, don’t immediately accept it. Instead, consult an attorney to determine if it’s an appropriate amount based on your case value. If you choose to accept the initial statement, you will be unable to pursue other options later.

When Should I Hire a Lawyer for My Rear End Accident?

Many rear-end collisions involve minor damages and minimal to no injuries. In these cases, you may easily file a claim and reach a favorable settlement on your own. However, some cases involve complicating elements such as extensive damages and high costs that put a lot at stake. Work with an attorney to navigate the claims process or a lawsuit in these instances.

Reliable lawyers will understand your case details and find out your options. They’ll determine which damages you sustained and their worth, which can help guide your case. A qualified lawyer will also have plenty of experience with accident cases and be able to help you move through the claims process or a lawsuit, enabling you to focus on recovery. Without the help of an attorney, any mistake when filing a claim or lawsuit could compromise your case and limit your compensation amount.

Even if an attorney chooses not to handle your case, you can still receive sound advice regarding your next steps through a free consultation at no cost to you.

If you sustained severe injuries or lost a loved one in a rear-end collision or another type of vehicle accident, you may be able to recover compensation. With the help of the right lawyer, you may benefit from representation throughout the legal process. To find out if you have a viable case and learn about your options following a rear-end collision, reach out to a car accident legal team in Fort Lauderdale for your free consultation today.