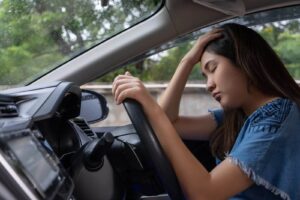 Driver fatigue is a condition often associated with long-haul commercial truck drivers. However, this condition can affect other drivers on the roadway as well. In tourist-heavy places like Fort Lauderdale, with a vibrant nightlife featuring live music, dancing, cocktails, and more, car driver fatigue accidents are more common due to a higher number of drivers being on the roadway during the late-night hours.

If you were injured in a Fort Lauderdale car accident involving a fatigued driver, an experienced legal team can seek compensation for your injuries and discuss the services their firm can provide you.

What Is Driver Fatigue?

As explained by the National Highway Traffic Safety Administration (NHTSA), most drivers will get behind the wheel when overly tired due to a new baby, a late shift at work, or a night with friends. This is called fatigued driving-however, fatigue erodes drivers’ skills to operate their vehicles safely.

Driver fatigue results in around 100,000 accidents a year, and about 700 people die each year due to driver fatigue.

The most common causes of driver fatigue include:

The Dangers of Drowsy Driving

According to the National Safety Council, going without sleep for 20 hours produces similar effects on a person’s ability to operate a motor vehicle as the legal impairment limit of 0.08 BAC. Some of those effects include a slowed reaction time to hazards in the roadway such as other cars or pedestrians, a decreased awareness of roadway conditions such as heavy traffic, difficulty maintaining speed or a single lane of travel, and inability to pay attention to the task of driving safely.

In addition to creating deficits in the skills needed for safely operating a motor vehicle, driver fatigue also causes some people to experience short involuntary periods of inattention known as micro-sleeps. The average length of a micro-sleep is 4-5 seconds, which is about the same time it takes a driver traveling at highway speeds to drive the length of a football field without paying attention to the roadway. Around 57 percent of accidents caused by driver fatigue involve the drowsy driver drifting across other travel lanes or even off the road.

A study conducted by the AAA Foundation revealed that drowsy driving is a factor in:

Portrait of a Drowsy Driver

Any driver of any age can suffer from driver fatigue. However, some drivers are more likely to experience fatigue that places them at risk of being involved in a crash.

However, certain features make this type of accident more likely to happen here, such as:

Those who have sustained severe injuries in Fort Lauderdale car driver fatigue accidents can seek compensation through the personal injury claims process. Florida is one of many states that operate on a “no-fault insurance” system for car accidents.

This does not mean that no one is at fault for causing car accidents. Instead, drivers who register their vehicles in Florida are required to purchase personal injury protection (PIP) policy of at least $10,000 to cover a portion of the medical expenses and wage loss they experience in motor vehicle accidents, regardless of who is at fault for the accident.

To use the state’s civil court system to file a lawsuit against an at-fault driver, the claimant must be able to show that they have suffered an injury that meets the state’s serious injury threshold.

In short: any injury that significantly impacts your day-to-day activities, results in a permanent deficit, or causes you to be totally or partially disabled for at least 90 days can meet the serious injury threshold.

The outcome of your Fort Lauderdale driver fatigue lawsuit rests on your ability to prove that someone else was liable for the accident that caused your injury.

To prove their liability, you must show:

Some of the evidence that can be used to prove the liability of a fatigued driver includes:

The Type of Compensation You Can Receive

If you are injured in an accident caused by a Fort Lauderdale drowsy driver, you can seek compensation for economic and non-economic damages.

Some financial and psychological costs that plaintiffs commonly claim include:

The case resolves through a dramatic courtroom battle in nearly every movie or television show featuring a personal injury claim. While it makes for entertaining viewing, the reality is that around 95 percent of all personal injury claims resolve before they ever see the inside of the courtroom, often as a result of a settlement.

A settlement occurs when the at-fault party’s insurance provider makes an offer of compensation that is less than the value of the claim in exchange for avoiding costly and time-consuming litigation, and the claimant accepts this offer.

In addition to cost and time savings, the benefits of having a car accident claim resolved through a settlement rather than litigation include:

While this is the most common way to resolve a personal injury lawsuit, the ability to take the claim to court is an important one if the at-fault party’s insurance provider fails to offer fair compensation for the claim. When selecting an attorney to assist you with your claim, it is essential to find one who is as comfortable with fighting for your right to the maximum amount of compensation available through litigation as they are with the process of negotiating settlements.

Injured by a Fatigued Driver in Fort Lauderdale? A Personal Injury Attorney Can Help

You need a firm that has built a reputation as trial lawyers, providing aggressive representation of their clients both in the courtroom and out. A personal injury attorney seeks to gain the trust of their clients and the judges and juries they present their cases to. Look for an attorney known for meticulous attention to detail and thoughtful and experienced preparation.

Let an attorney explore your legal options for seeking compensation after a Fort Lauderdale car driver accident and tell you about the services they can provide.