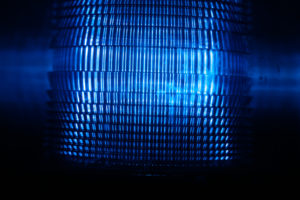 Blue light is one of the colors of the light spectrum that is visible to the human eye. Each color of light on the spectrum has a different wavelength and those with the longest wavelengths produce the lowest amount of energy. Blue light has a short wavelength that produces high amounts of energy. Research suggests the high energy associated with blue light may pose dangers to humans. Read on to take a closer look, from our experienced workers compensation attorneys at The Levin Firm.

A century ago, the sun was the only major source of blue (i.e., short wavelength, high-energy) light that humans ever encountered.

You have likely heard that sunshine is good for you. This is true, in part because the blue light we get from the sun has some positive attributes and promotes certain healthy body functions.

According to Prevent Blindness, a non-profit dedicated to protecting vision in children, benefits of blue light include:

Absorbing too much blue light, however, does more harm to humans than good. When you stare at a screen, the high energy blue light passes through your cornea and lens to your retina. In large enough doses, blue light has been linked to dry eye, cataracts, macular degeneration, slowing or stopping melatonin secretion, and increasing hormone production. These harmful effects on your body put people’s health at risk in several ways. Some of the most common dangers of blue light include:

Disruption of the Circadian Rhythm

Over the past several decades the average person has suffered a reduction in the quality of their sleep and how long they can sleep. Recent surveys have revealed that approximately 90 percent of those who live in the United States use some type of electronic device within one hour of going to bed at least three or four nights per week.

Researchers in a recent study instructed some participants to read a print book before bedtime and others to use an e-reader. They found those who used the e-reader did not fall asleep as easily and did not get as sleepy before bed. Additionally, e-reader users exhibited reduced melatonin secretion, reduced morning alertness, and a delayed circadian clock in comparison with those who read a printed book before falling asleep.

Although many Americans ignore the importance of sleep, medical experts agree it constitutes a crucial component of every person’s overall health. Sleep allows the body to repair itself and reset for each new day. People who get the rest they need have a higher likelihood of avoiding excess weight gain and heart disease, and tend to recover more quickly when they are ill.

The American Optometric Association (AOA) defines digital eye strain, also referred to as computer vision syndrome, as “a group of eye and vision-related problems” caused by using electronic devices for too long. Too much blue light and other issues from too much screen time lead to eye discomfort and vision problems. The amount of discomfort someone experiences tends to increase with the amount of screen time they engage in. Symptoms that many DES victims experience include eyestrain, headaches, blurry vision, dry eyes, and pain in the neck and shoulder area.

You are probably aware of the cancer risks and other dangers posed by X-rays and some other diagnostic imaging. Because X-rays are also on the light spectrum, researchers have questioned whether blue light similarly increases the risk of cancer. After all, blue light does give off high amounts of energy, though not as high as the energy of an X-ray.

A recent study published in Environmental Health Perspectives explored the link between blue light from electronic devices and LED street lights in major cities and an increased risk of some types of cancer, specifically breast cancer and prostate cancer. The study revealed that breast cancer was 1.5 times more likely and prostate cancer was twice as likely to appear in people who were exposed to high levels of blue light during their sleep cycles than in those who were not.

Too much exposure to blue light can also indirectly impact your health. The impact of too much blue light on a person’s sleep cycle results in less sleep. The Centers for Disease Control and Prevention (CDC) report that those who get less than seven hours of sleep per night risk high blood pressure, type II diabetes, and obesity.

Your blood pressure decreases while you sleep, so people who do not get enough rest have higher blood pressure for a longer part of the day. According to the CDC, one in three Americans has high blood pressure, which is a leading cause of heart disease and stroke.

Research also shows that proper rest maintains blood sugar at healthy levels, so people who do not get enough sleep can struggle with blood sugar control, ultimately leading to Type II, Adult Onset diabetes. Finally, poor sleep impacts the part of the brain that controls hunger.

This means that a lack of sleep can indirectly lead to weight gain by spurring unneeded eating. Consistently not getting the right amount of sleep can lead to obesity. In a recent study, women who were exposed to artificial blue light while sleeping had a 17 percent increased risk of gaining 11 pounds and a 33 percent risk of obesity.

Mood disorders such as depression and bipolar disorder have increased over the previous two decades, especially among teenagers and young adults. A recent study by the American Academy of Pediatrics revealed a 37 percent increase in symptoms related to mood disorders over nine years.

Technology plays a factor in this change and scientists have begun to explore the relationship between light and mood. Light can impact our mood directly and indirectly, but scientists believe the indirect connections contribute to depression and other mood disorders.

These indirect connections include:

Research reveals structural changes in the brains of patients who suffer from severe disruption of the sleep cycle, such as shift workers and international flight attendants. Disruption of the circadian rhythm also disrupts the expression of neurotransmitters related to mood, which include serotonin, dopamine, and norepinephrine. Scientists believe disrupted sleep patterns that negatively impact neurotransmitters lead to depression.

Medical research continues to document the damage that blue light exposure can do to a person’s eyes, specifically by destroying cells in the retina and promoting macular degeneration that can lead to partial blindness. Scientists categorize damage to the retina related to light in two different groups based on the exact wavelength of the light, how long a person was exposed, and which cells in the retina were affected.

The first group includes damage that occurs after days or weeks of exposure and the second group includes damage caused after minutes or hours to high levels of light. It is the second group which typically leads to permanent damage. Today’s lifestyle choices often lead people to rely on artificial light up to 18 hours per day and scientists have shown that blue light damages the retina more than other types of light.

Protecting Yourself from the Dangers of Blue Light

The screens we depend on every day are not likely going anywhere soon. Fortunately, you can prevent most of the damage caused by exposure to blue light if you follow some basic rules. Below we provide some tips you can use to help mitigate the dangers and protect yourself from the symptoms of blue light overexposure.

Don’t Forget to Blink Your Eyes

The average person blinks approximately 15 times each minute. Yet, as soon as a person is in front of a computer or other device, his or her blink rate decreases to between five and seven times per minute. The blink rate decrease occurs because people actually forget to blink. The human eye has a tear film which is a thin layer of liquid that protects the eye. When people forget to blink, this tear film dries up and causes discomfort and blurred vision. Keep your eyes protected by forcing yourself to blink regularly when you are using a screen.

Keep Your Eyes Lubed Up

Even when you force yourself to blink regularly, you can still suffer from dry eyes. Dry climates and warm rooms can also dry the tear film away that protects your eyes. You can use eye drops or artificial tears to add moisture to your dry eyes. If your inside space is dry and warm, consider investing in a good humidifier that adds moisture to the air.

Optometrists and ophthalmologists around the world recommend that those who spend a great deal of time in front of digital screens practice the 20-20-20 rule. This means that every 20 minutes you need to move your eyes away from the screen and focus on another object that is 20 feet away for at least 20 seconds.

Reduce eye strain from blue light by wearing glasses when you sit in front of a screen. You can get prescription eyeglasses designed especially for you to focus at computer screen distance. Some glasses for the computer also come with bifocals or trifocals that allow you to shift your focus between near, intermediate, and far distances.

If you regularly wear contact lenses, you should also give your eyes a rest and wear your glasses in front of screens. Some companies sell special glasses for blocking blue light, but the research on how well those glasses help reduce the danger and symptoms of blue light exposure is new and inconclusive. You can talk about this option with your eye-doctor and decide what works best for your eyes.

One of the worst things you can do for your eyes is to look at a bright screen in the dark. As mentioned above, you can be sure you will disrupt your sleep pattern with excessive light because when your screen is brighter than your surroundings, your eyes must work much harder for you to see. Instead, make sure you have some light nearby and adjust your screen brightness so it is similar to the level of light around you. You can also increase your screen contrast. This offers sharper images and type, which can reduce eye strain. You can also download a blue light filter app to help.

Cut the Glare on Your Screen

Many screens on computers, smartphones, tablets, and other devices have plenty of glare making it difficult to see. This forces you to strain your eyes. When you buy a new device, also purchase a screen filter to cut the glare. Your cell phone provider or wherever you purchase your computers or laptops can typically recommend the best product for your device.

Sit in the Right Position

While it won’t help much with blue light from tablets or smartphones, sitting in the proper position while behind a computer screen can help reduce eye strain. Your eyes should sit about an arm’s length from your computer screen (approximately 25 inches). You should also position your chair and/or screen so you are gazing slightly downward at your computer screen. This is better for your eyes than looking up or straight ahead at your screen.

Your job might require you to spend a lot of time behind a computer, which means you should try to limit screen time away from work. Simply cutting your recreational screen time in half or reserving it for necessity can help reduce eye fatigue. You should also refrain from using devices at least one hour before bedtime to avoid sleep disruptions.