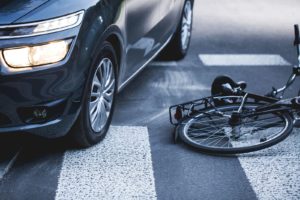 If you suffered injuries or a loved one died as a result of a bicycle accident, then you may have the right to receive substantial compensation. Contact an experienced bicycle accident injury lawyer today for a free case evaluation.

Bicycle accidents put cyclists at extreme risk of harm. As proof, look no further than the fact that crashes involving bicycles result in more than 2 percent of all traffic accident deaths annually, according to the National Highway Traffic Safety Administration (NHTSA). Nationwide, 467,000 bicyclists suffer injuries every year, according to the U.S. Centers for Disease Control and Prevention.

Pennsylvania itself registered 16 deaths annually, on average, in the most recent statistics tabulated. In fact, on a recent Father’s Day, a 17-year-old was struck and killed on his bicycle in Philadelphia.

Men account for roughly 70 percent of bicyclists killed in traffic accidents, and their injury rates soar higher than women’s injury rates. The average age of bicyclists in fatal accidents is 46. The death rate from bicycle accidents is highest in the age cohort from 50 to 59, although children from five to 19 years old suffer the highest injury rate, and constitute one-third of those seen in emergency rooms for bicycle injuries.

Bicycle accidents cause a wide variety of injuries. They range from the relatively simple and easily resolvable, such as a cut or bruise, to the extremely serious. A bicyclist involved in a collision with a car accident or truck accident, for instance, is virtually unprotected (except for a helmet) from the impact and will likely suffer severe injuries.

Some bicycle accidents can cause catastrophic harm, such as spinal cord injuries or traumatic brain injuries (TBIs). Catastrophic means that the person is no longer able to work at a previous occupation, can’t perform certain activities of daily living, or can no longer enjoy former pursuits. Someone who suffers a spinal cord injury, for example, may suffer paralysis and require around-the-clock medical care.

Even minor injuries, however, can have serious consequences for cyclists.

Common cycling crash injuries that can inflict severe disability and pain include:

These are just a few examples, of course. A bicycle accident can inflict just about any injury you might imagine. To ensure you have appropriate legal representation, always make sure your bicycle accident injury lawyer has experience representing clients who have suffered injuries similar to yours. A lawyer who understands the medical science behind your injury gives you the best shot at recovering the full scope of compensation you deserve.

Bicycle accident victims often have several options in seeking compensation for their injuries.

Second, bicyclists may also have the option of taking legal action against anyone legally responsible for causing the accident and its resulting injuries. This legal responsibility is known as liability. By hiring an experienced bicycle accident injury lawyer, the injured cyclist can seek payment from the party with liability for the cyclist’s injuries and losses. Typically, seeking payment involves filing a lawsuit against that party, and either negotiating a settlement of the lawsuit or taking the lawsuit to court.

Types of Compensation for Injured Bicyclists

A lawsuit seeking damages for a bicycle accident injuries may seek compensation for a wide variety of harms done to the cyclist. The specific types of compensation a cyclist can obtain vary depending upon the facts and circumstances of the accident.

In general, however, bicycle accident victims can usually seek payment for:

No lawyer can guarantee that a client will receive all, or even any, of the types of compensation listed above. However, by hiring an experienced bicycle accident lawyer, cyclists can give themselves the best possible chance of receiving the money they need and deserve to regain their health and rebuild their lives.

Putting a Value on a Bicycle Accident Claim

A cyclist’s economic (or out-of-pocket) damages usually account for a significant portion of the amount of a claim. These expenses will naturally vary from injury-to-injury and cyclist-to-cyclist.

Medical bills, for example, may run high for one type of injury, but relatively low for another. Lost wages add-up for a working-age cyclist with a high income, but might not amount to much for a cyclist who has reached retirement age and lives off of pension benefits. A cyclist who crashes a high-end racing bike may have a higher property damage claim compared to a cyclist whose bike was a second-hand clunker.

In calculating a client’s economic damages, experienced bicycle accident lawyers know the importance of collecting as much evidence as possible. Cyclists injured in an accident should always save all bills, statements, and receipts relating in any way to paying for the accident and its resulting injuries. No expense is too small to get included in the tabulation of economic damages that a cyclist can seek to recover in a legal action.

The non-economic damage from a bicycle accident can take a heavy toll on an injured cyclist, even if it does not translate directly into out-of-pocket expenses. By non-economic damage, we mean harm that does not necessarily come with a price tag attached; harms like physical pain, emotional suffering, and a diminished quality of life.

It is not a perfect method, of course. Sometimes, an injury with extreme non-economic impacts may require relatively low expense to treat. In those cases, multiplying economic damages by the highest multiplier may not truly reflect the scope of suffering the cyclist has endured because of an injury. That is why any injured cyclist should seek the advice and counsel of an experienced bicycle accident injury lawyer who has the skill and know-how to take all factors into account when determining the amount of money the cyclist should seek as compensation.

Proving Liability for a Bicycle Accident

A lawyer typically files a legal action seeking compensation for a client’s bicycle accident injuries against one or more individuals, companies, or government agencies. To force any of those parties to pay compensation, the lawyer must prove their liability for the harm the cyclist suffered. To prove liability, the lawyer needs evidence showing the facts and circumstances of the accident and the cyclist’s injuries.

Evidence about a bicycle accident can come from a variety of sources, including:

Anyone Can Afford an Experienced Bicycle Accident Injury Attorney

Bicycle accident injury victims sometimes avoid meeting with a lawyer out of fear that they cannot afford the lawyer’s services. That worry, while understandable, is misplaced.

Experienced bicycle accident injury lawyers offer free case evaluations, to encourage anyone injured in a cycling accident to come speak with them. That way, injured cyclists have nothing to lose in sitting down with an attorney for a consultation.

Bicycle crash lawyers also work on contingency in virtually all cases. Contingency means that a lawyer only gets paid a fee if the client receives money as a result of the lawyer’s efforts. The lawyer and client agree in advance on a percentage of any recovery that the lawyer can keep as a fee. Clients pay no money upfront and get a top-notch lawyer who wants the same thing they want: as much money as possible, as quickly as possible.

If You Need a Bicycle Accident Lawyer

If you or a loved one is in a bicycle accident, call an experienced bicycle accident lawyer to fight to obtain the highest damage compensation possible and help you achieve justice.