When Should I Sue After a Car Accident? 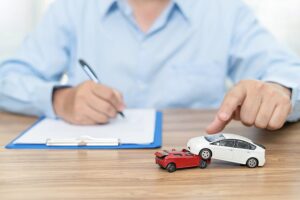 Getting injured in a car accident can be life-shattering. Nursing the pain–physical and emotional, dealing with piling bills, being unable to work are all stressful situations that follow car crash injuries. Introduce the complexities of seeking compensation, with insurance companies taking hard lines and sometimes offering lowball settlements or denying claims altogether, and the dilemma escalates even further.

Nonetheless, the bottom line is that if you got injured in a car accident caused by some else’s negligence, you have a right to recover damages. You may have heard some people say suing is not always a good idea. Others may have maintained that suing helps you recover all your damages, especially if the injuries are severe.

If you are wondering when to sue after a car accident or pursue a claim settlement with the insurance company, read on for more information.

Why You Should Sue as Your Last Resort

Generally, a lawsuit is a lengthy process that must follow specific steps. First, you or your lawyer must gather substantial evidence then file a complaint to the court. After filing the lawsuit, the defendant is served the complaint, stating the day they must appear in the court.

If the defendant (at-fault party) has an insurance cover, they notify their insurer about the lawsuit, who then hires an attorney to defend them.

Then the pre-trial processes kick in–discovery and court appearances–in readiness for the trial. The discovery process involves several legal procedures that help both sides learn about their opponent’s evidence. In this case, your attorney may interrogate the defendant and their witnesses (if they have any), request for document production relevant to the case, etc., or the defendant’s attorney may do the same with you.

During the pre-trial phase, the defendant’s insurer may or may not offer more settlements. If they decline to issue an offer or give an offer that you do not consider fair, then the trial takes place. In the trial, a jury or judge listens to the evidence presented, determines whether the defendant is liable, and gives a verdict, which may be favorable or unfavorable.

One of the downsides of taking this option to recover damages is that there is always a risk of losing the case. If that happens, you may still need to pay administrative costs such as the expense of hiring expert witnesses, fees for filing the lawsuit, cost of acquiring other evidence, phone charges, travel expenses, etc. In addition, the court may require you to pay the defendant’s attorney’s fee.

Such an eventuality can be devastating, bearing in mind you have already sustained massive losses from your injuries, lost wages, and car damage.

When Should You Sue?

Despite the apparent risk of suing the at-fault party, some situations leave it as the only option for recovering damages. These include:

#1. The Insurance Company Denies the Claim

If the at-fault party’s insurance company denies the claim, for whatever reasons, you may have no option but to sue. However, this may require hiring a lawyer to help you develop a solid case to prove the defendant’s liability and demonstrate the damages caused by their negligence.

#2. The Insurer Offers an Unfair Settlement

If the insurance company accepts their policyholder’s liability, they may offer you a settlement. But sometimes, the compensation might not be a true reflection of the damages you have sustained and are likely to suffer in the future following the injuries. If further negotiations prove futile and the insurer remains adamant about settling fairly, then you may have no option but to sue.

For instance, if your attorney estimates the damages to be between $30,000 and $50,000, and the insurer offers $10,000 and declines to increase the amount, then going to trial would be your best option. Nonetheless, the attorney must line up a solid case to demonstrate you have sustained substantial damages and the defendant is liable for them.

#3. The Cost of Your Damages Exceeds the Maximum Insurance Cover Limit

There are instances where your damages exceed the available insurance coverage. For example, if the driver has a liability cover of $30,000 and your damages add up to $40,000, their insurer can only pay the maximum cover limit. This would leave you with $10,000 uncompensated.

In this case, your options to recover the extra amount may include:

If you can establish the driver caused the accident due to fatigue and the records indicate they were working overtime, you could have a case against the trucking company. Similarly, when a manufacturer fits a car with defective parts, it could amount to suable negligence.

#4. The At-Fault Party Is Uninsured

You may also consider suing if the at-fault party is uninsured. However, this must be after you conduct investigations to determine whether they have recoverable assets. In most cases, uninsured drivers might not have assets, and suing them may be a waste of time and resources.

Alternatively, if you have uninsured motorist coverage, you may use it to cover the excess damages. Or you could file a claim against your PIP.

So, sue or not sue an uninsured driver?

That depends on their ability to fulfill the judgment. If they cannot, then it is not likely worth it.

How Long Should You Wait to Sue After a Car Accident?

Maintaining open and healthy communication with the insurance adjusters throughout the settlement process is essential. An experienced lawyer would know how to keep up with this despite lowball offers and know when their actions are out of bad faith.

However, the negotiations should be within a specific timeline to allow time to file a lawsuit should you disagree on a settlement. Civil cases have set deadlines within which you can seek action against a negligent party, known as the statute of limitation. Each state carries a statute of limitation for lawsuits, ranging between one and six years.

Your attorney should advise you on when is the right time to file a lawsuit to avoid missing the deadline. But generally, the earlier you file the case, the better, as some evidence might be lost over time. For instance, an eyewitness might fail to recollect all the accident details if you call them to testify after a long time.

In some states, there may be exemptions to the statute of limitations, such as:

In the first scenario, the time limit starts counting once the minor attains maturity or after the mentally ill person recovers. If the defendant leaves the state, either for work reasons or running away from their wrongs, the statute of limitation applies once they return.

What Is the Average Payout in a Car Accident?

It would be untruthful for an attorney to state how much your case will be worth. However, they can provide an estimate based on the severity of your injuries, disruption of the accident on your life, the pain and suffering endured, the available evidence to support these claims, etc. Primarily, they may use past recoveries to inform the estimate or compute the damages using specific formulas.

Insurance companies and lawyers mostly use the multiplier and per diem methods to calculate damages as follows:

Regardless of this, we cannot accurately speculate what factors the court may consider calculating the damages or the formula they would use. Their award may be lower or higher depending on their evaluation and deliberations on the presented evidence.

Some of the damages they may award include compensatory (monetary/economic and non-monetary/non-economic) and punitive damages.

These comprise damages that you can easily place a dollar amount on.

The court may also award damages that you cannot support with a bill or expense. Generally, these damages have an equally devastating effect on your life.

Examples include pain and suffering. This covers a range of damages such as loss of enjoyment of life, embarrassment, physical and emotional pain, inconvenience, psychological conditions such as depression, etc. As earlier explained, the court could award the damages as a multiple of your monetary compensation.

There is no guarantee that the court may award punitive damages. It only grants them if it discovers the defendant’s actions were grossly negligent. In other words, the award punishes the defendant and deters future offenders.

Should You Hire a Lawyer When Suing After a Car Accident?

Yes. Even though you may sue the driver directly, their insurer has a contractual mandate to defend them, so it will hire an attorney to help with the case. So technically, you will deal with powerful corporations with the resources to fight the claim the best way possible.

Besides, insurance companies have dealt with similar cases before, so they know how to exploit every available loophole to defend their policyholder aggressively.

To help you, your lawyer could:

In essence, hiring an attorney is a worthwhile trade-off that pays off if they win the case. As much as their fees reduce your settlement, you benefit by acquiring professional representation to help you present a strong case.

Generally, most car accident lawyers offer free consultation and work on a contingency fee basis. So, you are only responsible for paying the case administrative costs pre-settlement. But you should check this first with an attorney before signing a contract, as some have different payment policies.