Who Is at Fault in Most Motorcycle Accidents? 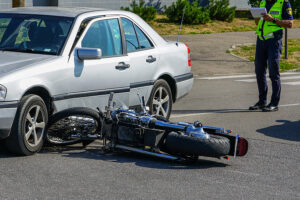 Motorcycle accidents can be tragic, and one cannot help but feel a sense of despair when you see one happen before you on the road. That is because most people understand that a likely outcome in a motorcycle crash is the rider’s death.

Motorcycle riders sometimes have a bad reputation, and many are quick to blame riders when an accident happens. The truth, however, is quite the opposite. Most motorcycle riders love to ride and put great value on their life and safety. They are conscious of the dangers of riding and do everything in their power to do what is right on the road.

Sadly, sometimes their best efforts are not enough, and more often than not the fault in a motorcycle accident lies with someone other than the motorcyclist.

Without question, the most common cause of motorcycle collisions is a negligent driver. While the public may perceive that motorcyclists create dangerous conditions on the road, the reality is that they are vulnerable to the drivers and other hazards that can be present on a roadway at any given moment.

Negligent actions by drivers occur each day, but when those actions intersect with the right of way of a motorcyclist, then there is a high risk of catastrophic consequences.

What Behaviors of Negligent Drivers Put Motorcyclists at Risk

The recurrence of distracted drivers on the road continues to be a problematic threat that can be difficult to combat. All travelers are at risk when distracted drivers are on the road, but motorcyclists are at higher risk of death if an accident occurs. Drivers engaged in other activities such as texting, eating, grooming, talking, or entertainment can’t react or identify motorcyclists that may be in their vicinity or approaching them.

Intoxicated drivers cannot use their senses fully. This puts motorcyclists at a great disadvantage as the impaired driver may be suffering from delayed mental capacity, blurred vision, poor judgment, and slow reaction times.

If an intoxicated driver crosses paths with a motorcycle, the chances of an accident increase exponentially. A motorcycle accident caused by a drunk driver can cause devastation, catastrophic injuries, and even the fatality of the rider and passengers involved.

Tired drivers are just as dangerous as intoxicated drivers. Research shows that the lack of sleep can be as bad as or even worse than the effects of heightened blood alcohol levels in a motor vehicle driver. Long work hours, congested commutes, and lack of restful sleep can cause a motorist to fall asleep behind the wheel, or fail to maintain the focus required to operate their vehicle safely.

An unsuspecting motorcycle driver may be unable to avoid a vehicle that has lost control due to the driver’s incapacity. Head-on collisions, sideswipes, and rear-end crashes are common motorcycle accidents caused by a negligent, tired driver.

A complete lack of respect or regard for traffic regulations and signs is a danger to motorcyclists. A motorcyclist must remain aware and alert of all drivers and traffic indicators to ensure their commute is as safe as possible.

Motorcycle riders rely on traffic signals and laws to travel safely and proceed through dangerous intersections. If a driver fails to obey a signal, they may catch the motorcyclist off guard and place the motorcyclist in the path of their recklessness. In many cases, a motorcycle rider can’t avoid the unexpected actions of a negligent driver running a red light or stop sign, or the driver’s failure to use turn signals.

Motorcycle riders are constantly watching the road and drivers around them. They use the tools available to them to help make decisions for them to travel safely, but when a driver fails to follow the laws and duty of care required of a motorist, the risk of an accident is high.

The faster a vehicle goes, the more time a driver needs to identify a hazard, come to a stop, or avoid impact with another object, vehicle, or motorcycle. Speeding drivers are often the cause of many preventable motorcycle accidents as their excess speeds interfere with their ability to recognize an oncoming motorcycle or a rider who is legally crossing an intersection.

A behavior blamed for fender benders in congested traffic, tailgating, or driving too close can kill a motorcyclist. Even at the lowest speeds a collision caused by tailgating will push a motorbike from underneath the rider, or eject the rider into the road or other traffic. Tailgating by negligent drivers is dangerous and can injure or kill individuals on a motorcycle in a preventable accident.

Quick lane changes, aggressive passing, cutting off other motorists. or failure to use turn signals are all aggressive behaviors. Motorcyclists are most vulnerable to these aggressive maneuvers as just a bump or sudden stop can easily cause a rider to lose their balance and control of their motorcycle.

This can result in a motorcyclist crashing into nearby objects or vehicles, ejection from their bikes, or sliding into the road at high speeds.

Why Are Motorcyclists Especially Vulnerable to Collisions With Motor Vehicles?

The NHTSA reports that motorcyclists are 29 times more likely to suffer a fatality in a motor vehicle collision than occupants of other vehicle types. The design of a motorcycle and the nature of motorcycle riding puts a rider at greater risk of injury in a collision.

Motorcycles require intense focus and the ability to operate multiple mechanisms at once. Driving a vehicle is a mostly passive activity, requiring little physical effort by the driver. On a motorcycle, a rider must maintain the balance, the strength to hold up the heavy machine, and the skill to maneuver to their destination safely.

However, the highest risk of injury and death comes not from the motorcycle and the rider, but the mentality of drivers and road conditions, which can contribute to the likelihood of an accident and the severity of the outcome for a motorcyclist.

The drivers of cars, in general, are not considerate of motorcyclists. The reality is that motorcycle riders pale compared to the number of cars on the road at any given moment. You can often go an entire commute and see just a handful of motorcyclists or maybe none at all. This disparity causes drivers to be less aware of the possibility and presence of riders on the road. Drivers know to look carefully for other vehicles and trucks but may not think to look for signs of a nearby motorcycle.

Inexperienced drivers can make unexpected maneuvers or take drastic reactions as they attempt to avoid a hazard. These unpredictable drivers may not have the presence of mind to know what to do as a motorcycle approaches. This can put a motorcyclist in danger of a collision, as the driver negligently encroaches their right of way or makes a poor judgment call.

The attitude of drivers towards motorcyclists can affect the risk of accidents and injuries for riders. Drivers are better protected in their vehicles than motorcyclists and may make risky or aggressive maneuvers with the mindset that the odds are in their favor. A bump to a motorcyclist can leave little damage to a car but can destroy the motorcycle or kill the rider.

Roadwork or debris from trucks and other commercial vehicles can be a nuisance to passenger vehicles. More often the biggest dangers to cars are traffic delays or possibly a flat tire. A motorcyclist that passes through or near road hazards is in critical danger and must take great care and precaution to avoid a possible collision.

Gravel, substances on the road, and traffic congestion all create a risk to rider safety. Any surprises on the roadways can lead a motorcycle to lose traction and the rider to lose control.

Most motorcyclists will avoid riding in bad weather. However, weather is often unpredictable, and rain and snow can strike at any time. When caught in these situations, a motorcyclist knows they must make every effort to get to safety as soon as possible.

Unfortunately, inclement weather exacerbates the already present dangers on the road and negligent drivers will continue to make reckless decisions. When there is dangerous weather, drivers must slow down as visibility can be drastically affected.

Drivers who fail to meet the care required in bad weather will put motorcyclists at great risk. Impaired visibility of drivers, excess speeds, and sudden lane changes are all common causes of collisions with motorcycles in undesirable weather conditions.

Injuries Suffered by Motorcyclists are Often Severe or Fatal

The actions, tendencies, and mindset of motor vehicle drivers regarding motorcyclists not only cause accidents but severe injuries. Motorcycle collisions rarely end in minor injuries, and more often than not cause disabilities or death.

Survivors of severe motorcycle collisions face a difficult road and life in the aftermath of an accident. For some, life will never be the same, and the accident can leave them needing lifelong care for even the most basic tasks. Those that lose their lives leave behind their families and loved ones, who are left reeling from their unexpected and preventable death and the lasting impacts of their absence.

The most common motorcycle injuries are:

The High Cost of a Motorcycle Collision

Although motor vehicle collisions between passenger vehicles are most common, the cost of a motorcycle accident is greater than any other type of accident on the road. Each year, motorcycle accidents, injuries, and insurance claims account for billions of dollars across the U.S. In any one year, the total losses from motorcycle collisions can top $16 billion. Motorcyclists account for only a small portion of travelers on the road, but the consequences of accidents involving a rider are staggering.

The extent of damages and injuries suffered by motorcyclists are significant on a national level, but more importantly, on a personal one. These costs can overwhelm families, cause financial strain and leave motorcycle accident survivors with an uncertain future.

The highest costs related to motorcycle collisions include:

If a motorcycle collision killed a loved one or injured you, you may seek compensation under the law. Motorcyclists have the same rights as drivers to seek recovery against an at-fault party for their damages and injuries that result from an accident.

If you are in a motorcycle collision, contact a motorcycle accident attorney as soon as possible. A lawyer will work alongside you to protect your rights and interests after an accident.

There are many causes of car accidents. However, some occur more often than others. If you suffered an injury in a car accident, it is important to understand w...

You were in a car accident and you suffered serious injuries. You know the accident was not your fault and your family and friends are encouraging you to seek l...

Car accidents—unfortunately, they can happen to anyone, anywhere. The immediate aftermath of an accident is chaotic. You are concerned about your damaged car,...