How Can I Recover Compensation for Injuries Caused by Lindsay X-Lite Guardrails? 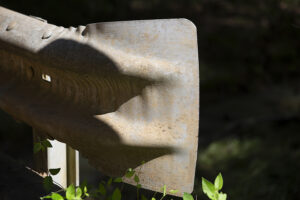 According to the U.S. Government Accountability Office (GAO), more than half of the fatalities in motor vehicle accidents on U.S. roadways occur when the vehicle leaves the roadway. Guardrails are a form of roadside safety hardware that diminish the consequences of motor vehicle accidents by preventing vehicles from departing the roadway into steep dropoffs or other hazards. However, sometimes the guardrail that should have prevented serious injuries instead fails—such as when drivers crash their vehicles directly into guardrails, particularly Lindsay X-Lite guardrails, which can cause penetrating injuries.

If you were injured or have lost a loved one because of a Lindsay X-Lite guardrail, read on for more information about the legal process for pursuing compensation and contact The Levin Firm for a free case evaluation with our experienced product liability attorney.

What Is the Problem With Lindsay X-Lite Guardrails?

When struck, guardrails should fold in on themselves, or telescope. When the guardrail telescopes, it should absorb some of the crash force while preventing an intrusion of the guardrail structure into the vehicle. Plaintiffs have filed numerous lawsuits across the country when the guardrail did not work as intended and, instead, pierced the vehicle and caused serious injury to the occupants inside.

In an annual report to investors, the company noted that the investigation relates not only to the problems encountered by drivers with the X-Lite guardrails, but also potential violations of the False Claims Act. False claims violations usually arise because of a whistleblower report from inside the company about unethical corporate behavior.

While X-Lite guardrails are no longer sold in the U.S., thousands are installed around the country. As a result of the federal investigations and the number of accidents involving these roadside safety structures, several of those states have replaced the guardrails, and some have also filed lawsuits against the manufacturer.

For example, in Missouri, more than 650 X-Lite guardrails were replaced at a taxpayer cost of $4 million. The state has filed a $5 million lawsuit against Lindsay Entities to recover that loss as well as associated costs. Missouri’s lawsuit alleges that not only is the design of the guardrail “defective, and ineffective at preventing spearing, vaulting, rollovers, and other unintended redirections of an impacting vehicle” but that it also “increased, rather than decreased, the chance of property damage, personal injury, and death to impacting motorists and passengers.”

In addition, the Missouri lawsuit alleges that the company fraudulently and negligently failed to disclose that it used different variants of the X-Lite system during testing and that it modified the system design throughout the testing.

In California, the state had to replace 800 X-Lite guardrails at a cost of about $20 million. In Tennessee, a young girl died from impalement by an X-Lite guardrail in what was otherwise reported by her father as a survivable accident. The state’s transportation department also announced that it would spend millions to replace the guardrails. In addition, Virginia has replaced all of its X-Lite guardrails on state roads with speed limits of at least 55 miles per hour.

In 2011, the Federal Highway Administration issued a letter stating that the X-Lite guardrails were eligible for federal reimbursement if installed by state transportation departments. The letters confirm that crash tests evaluated the safety of the product. However, the federal agency asserts that it does not have an independent means of verifying testing results or conducting independent tests on the product’s safety.

States and the surviving family members of those who have died from an X-Lite guardrail breaching the cab of the vehicle state that the Federal Highway Administration should have required the company to address the changes they made to the product during the crash tests, as the product on the roadway is different than the one tested in 2010.

What Is Product Liability?

Everyone in the manufacturing chain of a product—including the manufacturer, distributor, and retail supplier—has a legal responsibility to manufacture the product in a way that does not produce an unreasonable risk of harm when used as labeled by a consumer.

There are essentially three types of defects that can give rise to a product liability claim:

Product liability cases generally involve strict liability. What this means is that injured individuals need not prove negligence. The manufacturer is liable simply because the defect exists, and the burden of proof is usually on the defendant to prove that the defect does not exist.

Not all injuries caused by products give rise to a product liability claim. For example, despite knowing that knives pose a general risk of injury, a knife manufacturer cannot design a knife that will never, under any circumstances, cause an injury because they design knives to be sharp and to cut. However, if the knife is electric, and it features a defect that could cause the electric components to heat up during use and result in a fire, there would likely cause a product liability claim.

In the case of X-Lite guardrails, the company has stated: “It is important to note that guardrail end terminals are designed to mitigate the risk of hitting fixed objects such as utility poles, steep embankments, concrete barriers, and other unyielding objects when a driver fails to stay on the road, but they cannot eliminate all the risks involved with an unintended exit. A variety of factors contribute to the potential for injury when this happens, such as speed, the angle at which a vehicle makes impact, and whether road safety equipment is installed and maintained properly.”

Seeing Compensation for Injuries and Losses Caused by X-Lite Guardrails

If you suffered an injury or your loved one died from intrusion by an X-Lite guardrail into the vehicle during an accident, you can pursue compensation through either a personal injury lawsuit or a wrongful death lawsuit.

Expenses commonly sought in a product liability claim include:

Non-economic damages refer to compensation for the psychological or quality-of-life impacts that your injury had on your life.

Some of the impacts most frequently listed in non-economic damage claims include:

If you lost a loved one because of a defective product, you can seek compensation for your losses through a wrongful death claim. While every state’s rules on who is eligible to file a wrongful death lawsuit differ slightly, most states allow family members of the deceased to file these cases.

The damages available in wrongful death claims generally include the loss of wages, benefits, and other net accumulations to the estate, loss of services and support that was provided by the deceased to his or her loved ones, the cost of household services that the deceased can no longer perform, and non-economic damages, such as loss of companionship, guidance, and moral support. Depending on the circumstances of your case, non-economic damages may constitute a large percentage of the overall compensation amount.

A Product Liability Lawyer Can Help You

Product liability cases often prove quite complex, not only involving a large number of affected parties but also specific knowledge about the evidence required to prove your claim. Many individuals try to seek compensation on their own due to an assumed inability to pay upfront for a lawyer’s services. Because it is so crucial to have legal assistance with this process, reputable product liability lawyers ensure your ability to access legal guidance regardless of your financial status.

Companies who aggressively seek to hide product defects from consumers deserve an equally aggressive response from those who were injured or lost loved ones because of these negligent and deceptive practices. Let your lawyer fight to obtain compensation for the losses you incurred due to Lindsay X-Lite guardrails.