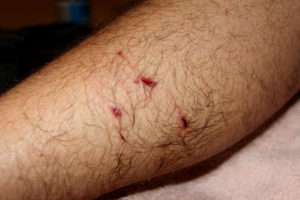 The Centers for Disease Control and Prevention (CDC) reports1 that approximately 4.5 million Americans sustain injuries as the result of a dog bite each year. While the large majority of these bites result in minor bruises or scratches, about one in five is serious enough to require medical attention. Many breeds of household dogs have extremely powerful jaws that have the potential of causing serious damage to the human body. Certain groups, such as small children or older adults, may be more at risk of experiencing complications associated with dog bites than others. Fortunately, laws exist in all 50 states that allow victims bitten by dogs to recover for their losses, which may include medical expenses, lost income, and physical and emotional pain.

Victims of dog bites may be eligible to obtain significant financial compensation for their losses. The best way to ensure that you get are fairly compensated for your injuries is to discuss your case with a dog bite lawyer licensed in your jurisdiction.