When a Child Is Struck By a Car, the Area of Greatest Injury Depends Mostly On? 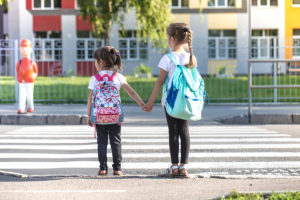 Two children were hit by a car while walking to school with their mother in North Philadelphia. The brother and sister were initially taken to Hahnemann University Hospital and then later transported to St. Christopher Hospital for further evaluation and treatment. At the time of the news report, the four-year-old boy was listed in critical condition with a head injury. The seven-year-old girl remained in the hospital as well, but her injuries were not as serious.

The two children were struck by the same vehicle, at the same time, going the same speed. So how and why were their injuries so vastly different? While there may have been slight differences in the angle at which they were standing or perhaps one child saw the vehicle a fraction of a second before impact and was able to brace for it, the answer to that question is this:

When a child is struck by a car, the area of greatest injury depends mostly on the size of the child and the height of the bumper on impact.

Child Pedestrian Injuries Are Different Than Those Sustained by Adult Pedestrians

According to the National Highway Traffic Safety Administration, and based on 2016 traffic accident statistics, 20 percent of children aged 14 and younger who die in traffic-related crashes are pedestrians who have been struck by a car. Pedestrian accidents caused the death of 245 children in 2016, including 101 aged 10-14, 68 aged 5-9, and 76 who were under the age of 5. Children, along with older adults, are considered the most vulnerable of all pedestrian age groups for accidents involving motor vehicles.

However, studies reveal that the injuries suffered by child pedestrian victims vary greatly from those suffered by adults. With adult victims, musculoskeletal injuries—particularly those involving the upper and lower legs and knees—were the most common injuries experienced in an accident with a car, accounting for more than 40 percent of all injuries sustained. However, in children, head and neck injuries were the most common, accounting for more than 34 percent of all child pedestrian injuries, while musculoskeletal injuries accounted for 22 percent. The third most common area for a child to be injured in this type of accident is the chest and abdomen.

The reason for this is because children are generally smaller in stature than adults. The area of greatest injury on a pedestrian’s body when being struck by a car is often the first point of impact with the bumper.

For an adult struck by a standard-sized passenger car, the bumper is likely to strike the legs or pelvic region, while a child’s injuries would depend on the child’s height. A younger, smaller child might experience the initial impact with the bumper in the head and neck. The point of impact for an elementary-aged child might be the chest and torso. A teenager, having attained much of the stature he or she would have as an adult, would likely experience impact to the pelvis or legs as an adult would.

The other component in the injury areas of pedestrians injured in automobile accidents is the bumper height. The bumper of a large pickup truck makes contact higher up on the body of any aged pedestrian than a compact car, often resulting in a greater chance of head injuries for elementary-aged children, and chest, torso, neck or head injuries for teenagers and adults.

While the size and bumper height are the greatest indicators of where the greatest area of injuries will take place in a child pedestrian accident, other factors influence the severity of injuries, including the following: 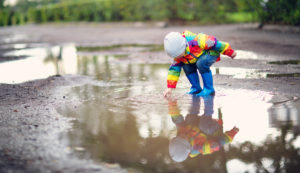 Research suggests that children often lack the cognitive development required to be safe pedestrians. Skills that they have not developed yet that can lead to being hit by a car include:

In addition to cognitive development, a child’s perceptual development is also not completely formed. This impacts a child’s ability to perform a visual search of a roadway to determine if cars are coming before choosing to cross.

Other factors that place a child pedestrian at a larger risk of a car include:

How to Avoid Child Pedestrian Accidents

Every accident is avoidable if drivers pay attention. They don’t always, though, and parents can teach their children these safety tips to reduce their risk of a car hitting them:

Is the Child Ever Liable for the Accident?

All motorists have a duty of care to others on the roadway. Generally, that duty of care is to drive safely and lawfully. However, the duty of care for motorists is higher when it comes to children. Lawmakers are aware that children lack the development necessary to make sound decisions when it comes to crossing the road. The duty of the motorist is to be extra cautious when driving in areas frequented by children, with the full realization that a child who darts out into the street is not negligent due to his or her young age and developing brain.

Therefore, it is rare to find a case where a child pedestrian is found liable for an accident, even if the child’s actions were at least partially to blame for why the accident occurred.