Can I Sue after a Bar Fight? 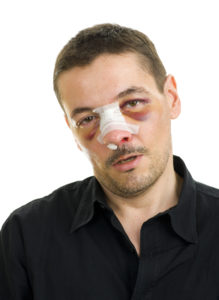 Many people flock to bars, restaurants and nightclubs to relax and have a good time. Unfortunately, while you are trying to enjoy yourself, there are other people who may have too much to drink or who simply want to start trouble. For this reason, fights commonly break out in such establishments and thousands of people sustain injuries on an annual basis from such assaults. Common injuries from bar fights often include facial injuries, head trauma, traumatic brain injuries, and more.[1] Some of these are serious and will require extensive medical care in order to physically recover. The good news is that innocent bar fight victims can generally recover financially, as well, by filing a premises liability lawsuit.

The first person who can be held liable for your injury-related losses is your assailant. Though it is likely he will also face criminal charges, those proceedings and punishments are completely separate than your case. You must consult with a Philadelphia personal injury lawyer for assistance in filing your own claim in civil court. If you can show that the assault was intentional, you have the legal right to recover for your medical bills, lost wages, and other losses.

In addition to the instigator of the fight, you may also bring a claim against the bar or other establishment in which the altercation occurred. In order to recover from the establishment, you must show that the bar was negligent and that negligence led to the fight and your injuries. Like any other premises, bars have certain duties, which include the following:

If a bar continues to serve an intoxicated patron and that patron starts a bar fight, the bar should be liable for the losses of the injured party. Additionally, if a bar does not have adequate security for the usual clientele and the lack of security leads to the failure to stop a fight, the bar can be found responsible. Acting quickly after a fight can help to preserve evidence such as witnesses and surveillance videos. If you have been attacked in a bar or club, you should always contact an experienced attorney as soon as possible.